The Canadair CL-44 was built and manufactured by Canadair during the late 1950s until the early 1960s as a turboprop airliner and cargo aircraft developed from the British Bristol Britannia medium-to-long-range airliner. The aircraft performed its maiden flight in November 1959 and was introduced in July 1960 by Royal Canadian Air Force. It was retired in 1971 and has a total number of 39 aircraft built. 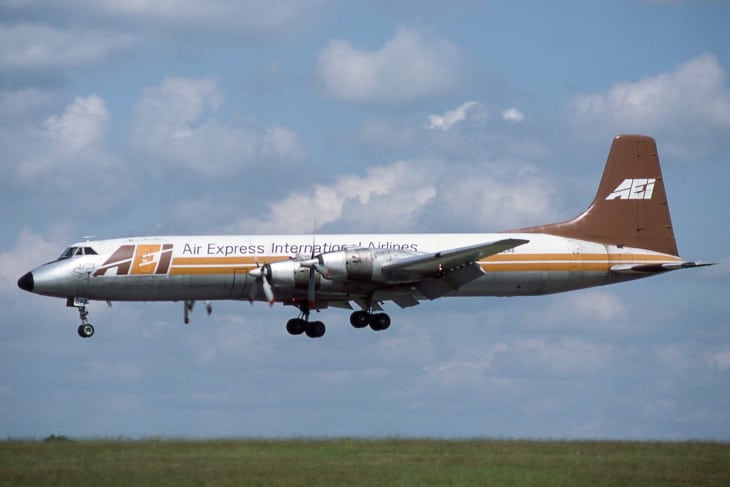 From the late 1950s until the early 1960s, the Canadian manufacturing company Canadair started to develop the CL-44 transport aircraft. It was based on the British Bristol Britannia medium-to-long-range airliner. On November 15, 1959, the aircraft prototype designated as Yukon took to the air for the first time at the Cartierville Airport. Several problems arose during flight testing such as an entire electrical failure to engines slipping up and nearly falling off. On July 19, 1960, the aircraft was introduced with the Royal Canadian Air Force and was retired in 1971.

The aircraft is powered by four Rolls-Royce Tyne 515/50 turboprop engines. It is a twin-spool turboprop with an axial six-stage low-pressure nine-stage high-pressure compressor, ten cannular flame tubes combustors, a three-stage low-pressure single-stage high-pressure turbine, and a pressure spray/splash with dry sump oil system. The engine produces a maximum takeoff thrust of 5,730 shaft horsepower each and drives four-bladed variable pitch propellers. The CL-44 has a maximum speed of 360 knots and a cruise speed of 349 knots. It has a travel range of 4,856 nautical miles and can fly up to 30,000 feet.