Even though the design of this impressive aircraft was derived from smaller airliners, it has been scaled up to be a gorgeous and impressive plane that is comfortable, safe and designed for easy transport over long flights, making it the favorite of many travelers. 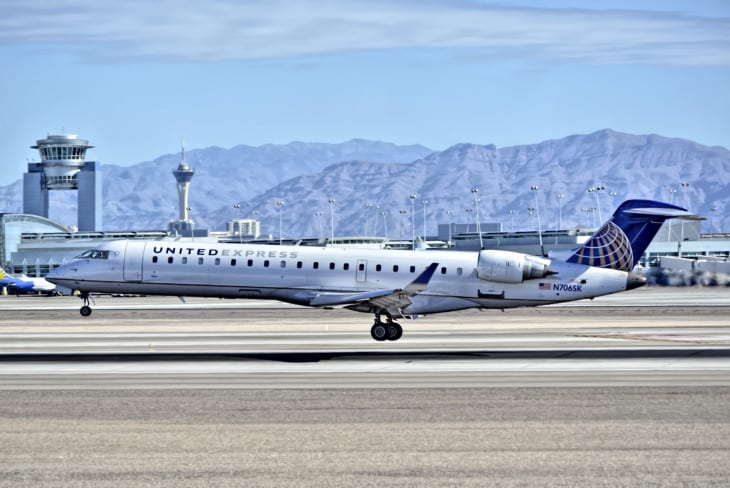 This member of the CRJ jet family easily seats between 70 and 78 passengers. It’s a popular aircraft that was first launched in 1997, with the first flight taking place in mid-1999. Thanks to high-quality components, it remains a great option for flying.

Special equipment, components, and parts make up the CRJ700, making it a powerful aircraft that is designed to provide great service for years to come. Bombardier Aerospace of Belfast provided the engine nacelles. These are located on the sides of the fuselage rear section.

Additionally, a Hamilton Sundstrand electrical generator provides the power. There are two drive generators that offer 40kVA. A Honeywell auxiliary power unit was installed in the plane’s tailcone.

With a fire detection system from Walker Kidde as well as Ratier-Figeac controls on the fuel management system, it’s easy to see the quality of work and components that went into creating this aircraft.

There are multiple companies that use the CRJ 700 as a part of their fleet, but the company that uses the most of this aircraft is Sky West. They boast 102 of these aircraft.

Other recent orders have come from GoJet Airlines and Mesa Air Group. They also are in service with Delta Connection Inc., Bit Air, Air Canada, Lufthansa Cityline, and more.

The shortest and smallest of the CRJ Series aircraft, the CRJ700 still has a great design that offers plenty of cargo room and space for passengers. Technically, this is a stretched-out version of the CRJ 200. The cabin width and wingspan have also been increased.

Thanks to the leading edge slats on the wing, the plane has improved lift. This helps compensate for the upgraded landing gear and the powerful engines.

A quiet aircraft, the CRJ 700 has a take-off level of just 89EPNdb and is much more fuel efficient than similar planes. The interior fit of the aircraft as well as its assembly is completed in Quebec at the Bombardier Canadair manufacturing facility.

They are also responsible for the creation of the rudder, flight deck, electrical systems, flight controls, and wings. Mitsubishi Heavy Industries makes the fuselage rear section, while GKN makes the doors and tail cone.

The impressive flight deck offers room for two pilots and boasts a Rockwell Collins Pro Line electronic flight and info system. There is an engine indication and crew alerting system as well. A Flight Dynamics HGS 4200 display and guidance system and multiple other systems improve flight.

The cabin is almost 21 meters long and has a center width of 2.57 meters. It offers 2×2 seating and has more than six inches of standing headroom.

Additionally, there is a total of 23.33 cubic meters of baggage space between the under floor and rear baggage compartments. A Liebherr air management system keeps the cabin cool, and a Hella lighting system keeps it bright.

One of the best features of the CRJ 700 is that it boasts very powerful twin engines. They are General Electric turbofan engines. The CF34-8C1 engines offers an impressive 54.4kN thrust during take-off. Additionally, they provide 61.3kN thrust and have power reserve for use in-flight or during an emergency.

In mid-2005, the engines were updated to the CF35-8C5B1 engines from General Electric. These provide a bit more thrust during take-off as well as additional thrust. They offer 58.4kN and 63.4kN, respectively.

This plane, like others, has to have enough room for landing and take-off in order to be safe when on the runway. It requires 1,605 meters for take-off and just 1,546 meters for landing. At 32.3 meters long, it’s easy to see how this aircraft can easily operate in such a small area.

This powerful aircraft has hydraulically retractable tricycle-type landing gear, which is fairly typical of large aircraft like this. The landing gear is made by Menasco Aerospace. Additionally, the aircraft is fitted with hydraulics systems from Park and Abex Hydraulics.

The CRJ 700 has a few competitors in the skies. One is the Sukhoi Superjet 100, which is in the 75-95 seat category. Another is the Mitsubishi Regional Jet, which can seat between 70 and 90 passengers.

The operating cost per block hour varies, but averages around $1,246.

You may also choose to view all other current aircraft models from Bombardier Aerospac, or compare this aircraft with other commercial passenger airplanes the Bombardier CS300, Bombardier CRJ 1000 and Bombardier Q400.