The largest of the A350 family, the A350-1000 can easily seat between 350 and 410 passengers. It’s a powerful aircraft that was designed to be comfortable, have a low fuel burn, and be incredibly safe for long trips, making it a great addition to the skies. 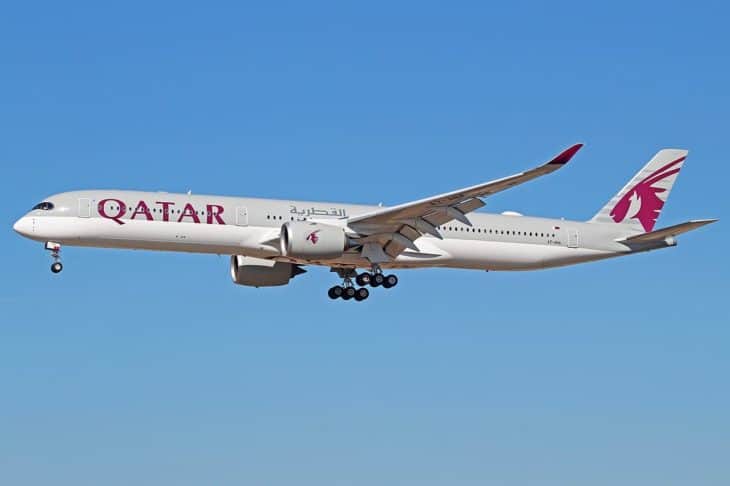 Designed in a three-class configuration, this large aircraft is twin-aisle and has a wide body. Thanks to its large size, it can easily seat up to 410 passengers without sacrificing comfort in the air.

This aircraft first entered into service in February of 2018, making it a relatively newcomer, but its power, how easy it is to fly and control, and the fact that it is comfortable and quiet make it a great option.

In February of 2016, the final assembly of the A350-1000 was begun. Later that year, in November, the plane had its first flight test. In March 2017 the plane underwent cold-weather trials, while in May 2017 it completed its first long-distance flight.

The shape of the wings is very advanced and allows them to change shape and morph while the aircraft is in flight. This allows for optimal flight and reduces how much work the aircraft has to perform. Additional modern technology was included to help decrease fuel consumption and improve pilot control.

There have been 180 orders of the A350-1000, with 25 of them delivered. Multiple airlines around the world rely on this aircraft, including China Airlines, Cathay Pacific, Delta Air Lines, and Lufthansa.

Designed to be an impressive 7 m longer than the A350-900, this plane has some modifications that make it ideal in the skies. Composite materials in the advanced airframe add strength without too much weight, modified wing trailing edges, and improved main landing gears all work together to improve the aircraft.

There are a number of environmentally friendly materials used in the construction of the A350-1000. Additionally, there are 41 exterior lights and advanced flight control systems.

This aircraft was redesigned in 2011 with a more powerful engine and higher weights. The A350-1000 features an automatic emergency descent function that drops the plane to around 3,000 m and will also alert air traffic control.

Like other Airbus airplanes, the A350-1000 is packed with powerful equipment in the flight deck to ensure that the aircraft is easy to operate and control. The advanced avionics software adaptation has a push/pull button. Additionally, the cockpit is very similar to other A350 aircraft, making it very easy for pilots to train on these planes.

The enhanced cabin of the A350-1000 is one of the best features of this aircraft and is the reason why it is so comfortable and ideal for long travel. The next-generation cabin has wide seats, LED ambient lighting, twin aisles, and movies on demand.

It’s designed to be as quiet as possible, ensuring that passengers can easily converse with each other or sleep when on the plane without feeling interrupted.

The large Rolls Royce Trent XWB-97 engines are paired, which means that they can offer an incredible amount of power. This aircraft benefits from the fact that each of the engines provides an impressive 97,000 lbs of thrust during takeoff.

These engines are the most powerful ones used on any Airbus plane, which means that the A350-1000 enjoys extended range, as well as the ability to easily hold additional cargo. The engines were chosen because they allow the plane to travel long-haul routes, as well as shorter flights.

This powerful aircraft can easily reach a speed of 0.89 m and has an impressive range of 14,800 km. The maximum take-off weight is 308 t, and the maximum landing weight is 233 t.

The A350-1000 regularly competes with Boeing. The most popular competition that this Airbus aircraft has is the 777-9x. Both of these airplanes are super twin airplanes and have powerful engines, plenty of room for passengers, and can easily handle long-haul flights. Boeing and Airbus have been competitors for years, so it is no surprise that the A350-1000 is considered a top Boeing competitor.