On April 8 1963, the Douglas Aircraft Company announced the development of a short range aircraft DC-9. The initial DC-9 features improvements in its design, with engines attached on the rear fuselage, a T-tail configuration, a slightly swept wings, and a seating capacity of up to 90 passengers in a five abreast layout. 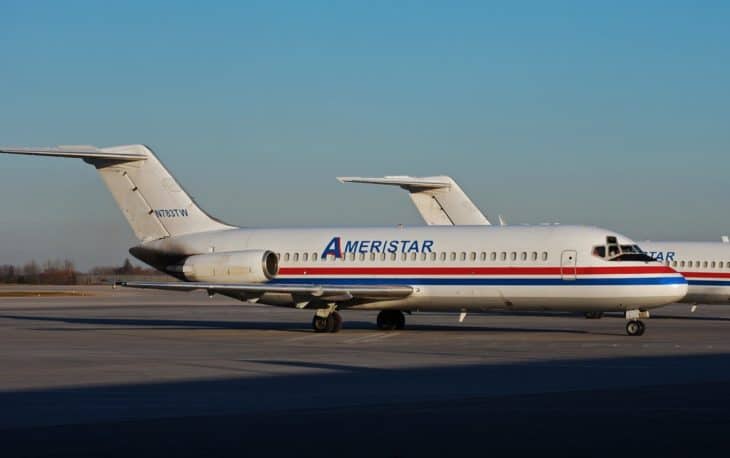 On February 25 1965, the initial DC-9-10 took its maiden flight. After a few weeks, the second model made its flight, with five test fleet aircraft to fly on July.

On November 23, the aircraft was awarded its airworthiness certification. On December 8, it entered into service with Delta Air Lines, the initial operator of the aircraft.

The McDonnell Douglas DC-9 Series 10 was produced in two primary sub-versions namely the Series 14 and the Series 15. However, three were assembled as Series 11 and the other one as Series 12 on the first four models; these were transformed to Series 14 afterwards.

On March 1 1967, a passenger and cargo variant of the DC-9-10 was certified. It is designed with a 3.5-meter long and 2.1-meter wide side cargo door onward of the wing and a strengthened cabin floor.

The aircraft has a wingspan of 27.25 meters. It does not have leading edge slats compared to the other series of DC-9. It is designed for short take off and landing range without needing to use any leading edge high-lift devices. The wing is equipped with airfoils that produce exceptionally high maximum-lift ability for the purpose of acquiring the low stalling speeds needed during short-field operations.

The Series 10 is designed with a passenger door located in the port forward fuselage, and a service door or emergency exit door located on the other side. There is an accessible airstair attached beneath the front passenger door.

The DC-9-10 can accommodate up to 109 passengers in a maximum certified exit limit. A standard economy configuration can seat 90 passengers while a mixed-class setting can seat 72 passengers, with 12 seats for first class and 60 seats for economy class.

The aircraft has a cabin length of 18.29 meters, width of 3.1 meters and height of 2.1 meters. It also features a two-crew analog flight deck.

The Series 10 is outfitted by two rear-mounted turbofan engines from Pratt and Whitney. The aircraft was provided with a 14,000 lbf thrust from JT8D-7 engine.

The subvariant Series 14 was initially certified with a maximum take off weight of 38,900 kg, however later options provide additional weight to 41,100 kg. The maximum landing weight of the aircraft is 37,100 kg. It has a fuel tank capacity of 3,693 US Gal.

On January 21 1966, the subvariant Series 15 was certified with an increase in maximum take off weight resulting to 41,100 kg. Usual range of the aircraft with fifty passengers and baggage is 950 nautical miles rising to 1,278 nautical miles during long range flights.

The aircraft has a maximum cruise speed of 484 knots and a climb rate of 2,800 feet per minute.

On September 6 1987, a Midwest Express Airlines flight 105 from General Mitchell International Airport crashed shortly after it took off due to inappropriate control inputs of the flight crew after an engine failure. 31 people died on the accident.

On November 15 1987, a Continental Airlines flight 1713 from Stapleton International Airport crashed shortly upon take off killing 28 people on board.

On December 3 1990, a Northwest Airlines flight 1482 bound for Pittsburgh International Airport taxied the wrong way due to lack of proper crew coordination. The aircraft was hit by a Boeing 727 resulting to 9 fatalities.

On June 27 1980, an Itavia flight 870 from Guglielmo Marconi Airport crashed into Tyrrhenian Sea that led to various investigations which might be a terrorist attack, a shootdown, or a conspiracy by the government. 81 people on board died on the accident.

On July 6 2008, a USA Jet Airlines flight 199 crashed upon approach to Saltillo Plan de Guadalupe International Airport in Mexico. The pilot was killed and the first officer suffered severe injuries.