The DC-8-51 is part of the series 50 of the DC-8 narrow body airliner produced by Douglas Aircraft Company. This aircraft is powered by Pratt and Whitney JT3D turbofan engines with a maximum thrust of 17,000 to 18,000 pounds, capable of flying up to 35,000 feet. 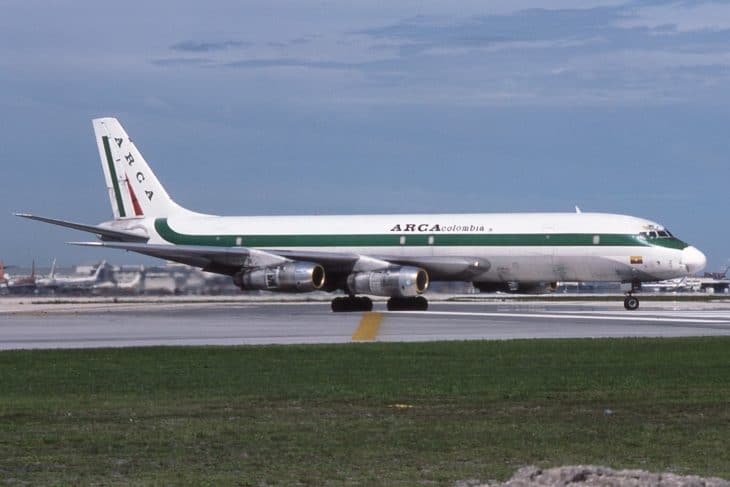 The DC-8 airliner was produced by Douglas Aircraft Company from 1958 to 1972.

In mid-1952, Douglas Aircraft Company privately started studies of jet transport project. After a year, these studies had evolved into a form identical to the DC-8.

The DC-8-50 series received its aircraft certification in 1961.

There were eighty-eight DC-8-50s built on top of the converted aircraft from previous series, and a total of 142 DC-8-50 aircraft recorded deliveries. Among the DC-8 Series, the DC-8-50 remained in service as freighter.

The DC-8-51 is a four-engine aircraft powered by JT3D turbofan engines from Pratt and Whitney. It has a maximum thrust of 18,000 lbf. The engine has a two stage fan, six stage IP compressor and seven stage HP compressor.

On August 13 1966, an Aeronaves de Mexico DC-8-51 with the registration XA-PEI named as Tenochtitlan crashed during a trip to the real estate in the surrounding area of Acapulco. The aircraft was flying below the minimum altitude published for that area in night flight conditions, the pilot was not able to detect the proximity to the mountains located at the site of the impact, 20 nautical miles from Acapulco International Airport. Six people on board were killed on this accident.

On December 24 1966, an Aeronaves de Mexico DC-8-51 with the registration XA-NUS named as Acapulco from John F Kennedy International Airport crashed landed on the dry Texcoco Lake during approach to Mexico City. There were no fatalities recorded in the incident, however the aircraft was extremely damaged.

On March 30 1967, a Delta Air Lines flight 9877 with the registration N802E crashed during a landing approach at New Orleans International Airport in Louisiana.  The six occupants on board were severely injured, however unluckily, thirteen people on ground were killed on the accident.