The Douglas DC-8-53 was one of the first and most successful jet-powered transports for passengers and later for cargo. The development was lengthy but produced a variety of amazing jets with few incidences. While Douglas faced stiff competition, especially overseas, there were many production orders from major airlines during its 13-year run. 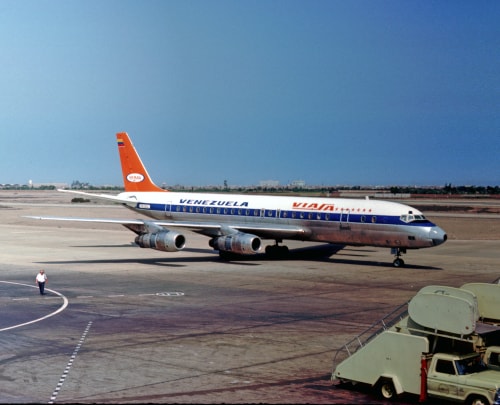 However, multiple consultations with airline engineers resulted in several changes including a widening of the fuselage by 15-inches to allow for additional seating, larger wings and tail surfaces, and a longer fuselage. As a result, the DC-8 was announced in July 1955 with four versions, all of which had the 150-foot-6-inch airframe and 141-foot-1-inch wingspan, but each aircraft varied slightly.

Douglas’ original thinking about the airliner market came true with the transition to turbine power. The pioneer 40-60-seat Vickers Viscount was popular with passengers and airlines because the plane was quieter, faster, and more comfortable than piston-engined types. The DC-8-53’s main rivals were the British 90-seat Bristol Britannia and Lockheed, who committed to the 80-100-seat Electra turboprop.

American Airlines and several other major airline companies purchase 35 of the Electra’s. During its heyday, the DC-8-53 was also competing against new technologies like the French 90-passenger twin jet from Sud Aviation Caravelle and Boeing’s 707 was soon launching. No airlines could afford not to purchase these advanced jets if their competition also made the purchase.

The DC-8 has also been subject to 46 hijackings in which two fatalities occurred. The deadliest incident in which the DC-8 was involved in the crash of Nigeria Airways Flight 2120 on July 11th, 1991 in which there were 261 fatalities. The plane caught fire shortly after takeoff and crashed while attempting an emergency landing back at the airport.

The DC-8 had a maximum range of 5,855-miles which was perfect for long-haul passenger flights. The freighter versions had a volume of 9,310-cubic-feet and a maximum payload of 88,022-pounds. The maximum flight range, with a full payload, was 3,000-miles. The engines on both passenger and freighter jets were the P&W JT3D-3B.

Since its launch in 1959, the DC-8 has had a total of 556 deliveries, the most are the 50 series of the jet with 142. The greatest number of deliveries came in 1968 when major airlines ordered 102 DC-8’s of various series. The least number of orders was available in its last year, 1972 with 4 total deliveries.

As recently as January 2020, four DC-8’s are in commercial operation, three of which operate for Trans Air Cargo Service and the fourth with CFS Air Cargo. Skybus Cargo Charters, based in Lima, Peru, has three DC-8-70s in its active fleet. Also, Samaritan’s Purse, a disaster relief organization, operations one DC-8-72.

The definitive DC-8 had a short fuselage and the same engine that powered most 707s. The DC-8-51, DC-8-52, DC-8-53 all featured 17,000-pound JT3D-1 or 18,000-pound JT3D-3B engines, thus varying their weights, although each of these planes was functionally the same with most other similar specifications. The DC8-55 launched in June 1964 with JT3D-3B engines and a strengthened structure.

In May 1961, Douglas developed freight versions of the DC-8 Series 50 (named the Jet Trader) with an original plan to fit a bulkhead separating the front 2/3 of the cabin for freight and 54-passenger seats in the back. Instead, they used a movable bulkhead to change the seating from 25 to 114.