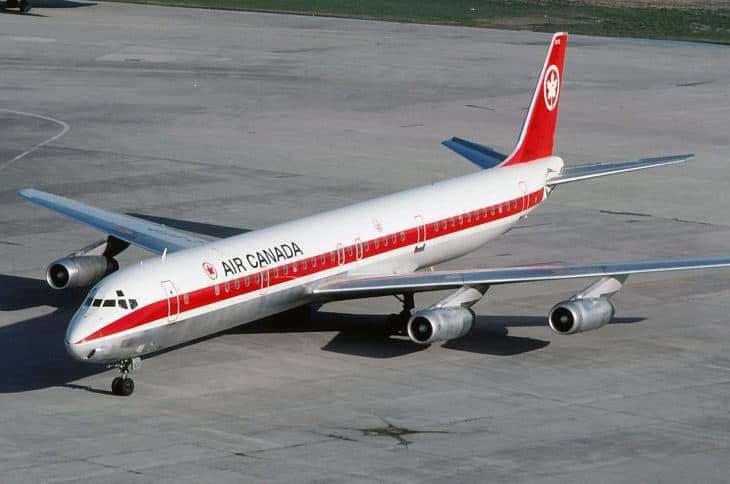 107 units of DC-8-63 were constructed that made it the most prominent version among the Super series of the DC-8. The following airlines are the customers for the DC-8-63:

In 1972, production of the aircraft came to an end.

The DC-8-63 has the added fuel capacity same as of the -62. The enlarged wing has a span of 45.2 meters, the engine and the nacelle were upgraded.

The DC-8-61 and the DC-8-63 can accommodate up to 259 passengers which made them the largest passenger-carrying capacity aircraft until 1970, when the Boeing 747 was unveiled.

Powered by the Pratt and Whitney JT3D-3B, the engine of the DC-8-63 is a turbofan engine based from the Pratt & Whitney JT3C turbojet. It has a maximum power of 18,000 lbf and a range of 4,000 nautical miles.

On July 1 1968, Seaboard World Airlines flight 253A was cut off by Soviet Jets when it unintentionally overstepped Soviet airspace. All the passengers were detained for two days.

On October 17 1969, another Seaboard flight was damaged by fire after it overran the runway at Oakland International Airport. All of the passengers survived.

On July 5 1970, Air Canada flight 621 crashed near Toronto Pearson International Airport when the aircraft attempted to land. All of the passengers died on this accident.

On January 29 1971, Canadian Pacific flight 301 was hit while taxiing upon landing by a Trans Australia Airlines flight 592. There were no fatalities during this incident.

On September 8 1973, World Airways flight 802 crashed on high ground during approach to Cold Bay Airport that killed all six people on board.

On March 23 1974, an Airlift International was burned while being service at Travis Air Force Base. The accident resulted to one fatality.

On March 3 1978, Iberia flight 575 slipped off the runway at Santiago Compostela Airport. All of the passengers survived on the incident. On November 15, Icelandic Airlines flight 001 crashed on approach, killing 183 passengers on board.