Douglas DC-8-62 is a single-aisle aircraft and one of the versions of the Super 60 series built by Douglas Aircraft Company, now known as McDonnell Douglas. 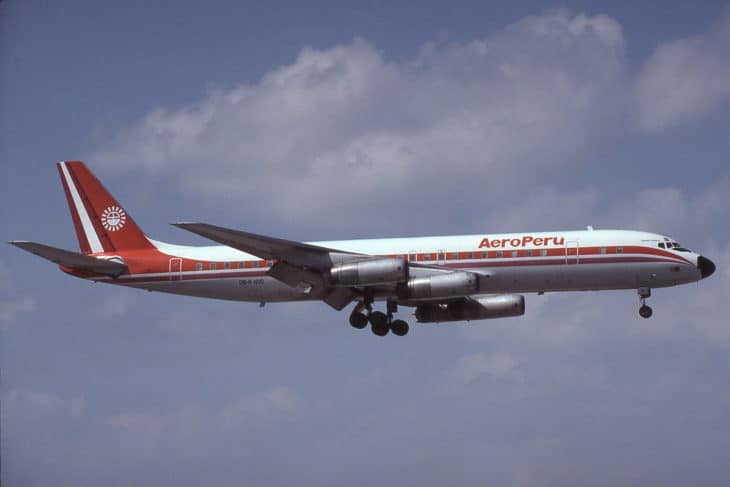 The McDonnell Douglas DC-8-62 has a shorter fuselage in comparison with the other two variants: series 61 and series 63. However, the DC-8-62 is more capable of flying nonstop long-range operations.

The aircraft has a simpler stretch, two 1-meter plugs forward and after of the wing that takes the overall fuselage length to 48 meters. The height is 13.1 meters and the fuselage diameter is 3.74 meters.

The DC-8-62 has some alterations in order to produce greater range. The wing has a span of 42.3 meters, with 0.91-meter wingtip extensions to reduce induced drag and to increase fuel capacity. The engine pods were reconstructed, the pylons were extended and nacelles were replaced in order to reduce drag.

The engine was maintained however the pylons were reconstructed to get rid of their exposure above the wing and have them sweep forward clearly to make room for the engines to move around 1 meter forward. The engine pods were altered by reducing its diameter and getting rid of the bypass duct.

The DC-8-62 is a bit heavier than the other variants. It can accommodate up to 189 passengers.

Powered by four turbofan JT3D-3B, the engines were provided by Pratt and Whitney, an American aerospace manufacturer of aircraft engines. It has a maximum thrust of 18000 pounds each.

On November 22 1968, Because of heavy fog and other factors, Japan Airlines Flight 2 crashed during landing in San Francisco Bay. Fifty-five hours after the incident before they were able to retrieve the aircraft. None of the passengers were injured during the incident.

On January 13 1969, Scandinavian Airlines System flight 933 crashed in Santa Monica Bay due to pilot error while approaching the runway. 15 died out of the 36 passengers and 9 crew.

On April 19 1970, another Scandinavian Airlines System with Flight 986 was damaged by fire while taxiing for take-off at Fiumicino Airport, Rome. The engine no. 1 went through an uncontained failure. All of the passengers survived during the incident.

On September 15 1970 at John F. Kennedy International Airport, Alitalia (the flag carrier of Italy) Flight 618 crashed on landing when the pilot selected reverse thrust on final approach leg because of the non-standard vectoring of the air traffic controller. All of the passengers survived during the incident.

On November 28 1972, Japan Airlines flight 446 from Sheremetyevo International Airport crashed while on initial climb upon take-off. After 30 seconds leaving the ground, the aircraft crashed 150 meters far off the runway end. 61 died during this accident.

On January 13 1977, JAL Cargo flight 8054 from Washington to Tokyo crashed suddenly after take-off because of pilot intoxication. All five passengers were killed on the accident.

On September 1977, Japan Airlines flight 715 crashed in Malaysia. 34 people died on this accident.

On October 8 1979, Swissair flight 316 crashed while trying to land at Athens-Ellinikon International Airport. The aircraft overran the runway and stopped on a public road. 14 passengers died on this accident.

On June 7 1989, Surinam Airways flight 764 crashed during approach to Paramaribo, Surinam. The accident killed 176 people on board that made it the deadliest aviation disaster in Surinam’s record.

On March 12 1991, Air Transport International N730PL was destroyed when it overran and struck a sand berm and an ILS shack. Both of the engines and main gears were destroyed.