Manufactured by McDonnell Douglas under the DC-8 family, the DC-8-61 is equipped for higher capacity and medium range. It has two fuselage plugs that is stretched by 11 meters, increasing maximum seating capacity to 180-220 passengers in a mixed-class configuration, and an 80 percent underfloor freight capacity. 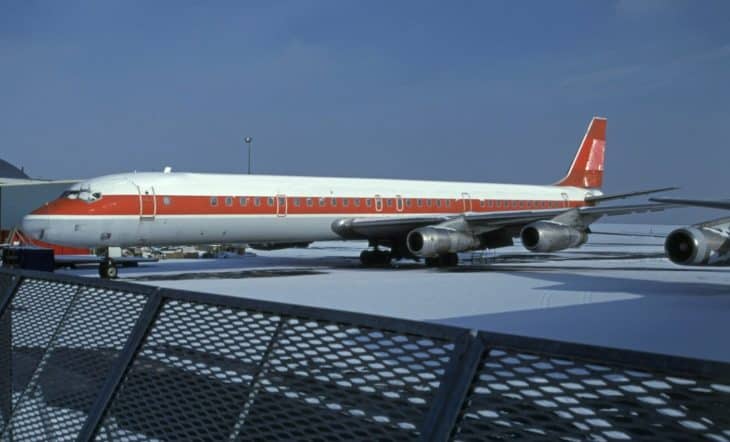 In April 1965, the improved series 60 were announced by Douglas Aircraft Company, later known as McDonnell Douglas, an American aerospace manufacturer in Southern California.

On March 14 1966, the DC-8-61 took its maiden flight. On September 2, the aircraft received its type certification at a maximum weight of 147,420 kg from the Federal Aviation Administration (FAA).

In January 1967, deliveries of the DC-8-61 started. In February, the aircraft entered into service with United Airlines, a major American airline that operates domestic and international flights based in Chicago, Illinois.

Designed for high capacity and medium range, the DC-8-61 known as the “Stretched Eight” has an exterior length of 57 meters, tail height of 13.1 meters and a fuselage diameter of 3.74 meters. There is a 6.1-meter plug in the forward part of the fuselage and a 5.1-meter plug aft fuselage. The increase in length needed enhancement of the structure, however the standard DC-8 design had enough ground clearance already to allow the one-third cabin size increase without needing longer landing gear.

The aircraft has a cabin length of 50.1 meters, width of 3.51 meters and height of 2.21 meters. It can accommodate 180 to 220 passengers in a mixed-class seating, or 259 passengers in a high density setting. It provides 60 percent more seating capacity compared to the typical DC-8.

On December 28 1978, a United Airlines flight 173 N8082U from John F. Kennedy Airport in New York crashed because of fuel exhaustion near Portland, Oregon. Ten were killed among 189 people on board.

On January 15 1981, an Overseas National Airways N913R was wrecked during a hangar fire in Luxembourg.

On February 9 1982, a Japan Air Lines flight 350 JA8061 from Fukuoka crashed on approach to Haneda Airport in Tokyo. Twenty-four died among 174 people on board.

On September 17 1982, a Japan Air Lines Hidaka aircraft was wrecked when it went beyond the runway at Shanghai, China.

On July 11 1991, a Nigeria Airways flight 2120 caught fire shortly after it took off from Jeddah, Saudi Arabia. It then crashed while attempting an emergency landing. 261 people died on this accident.

On August 18 1993, an American International Airways flight 808 N814CK crashed during approach to Guantanamo Bay, Cuba. The aircraft was totally wrecked but there were no recorded fatalities in the incident.

On August 7 1997, a Fine Air flight 101 N27UA from Miami International Airport crashed shortly after take off. Four people on board as well as one person on the ground were killed on the accident.