The F4D Skyray holds the distinction of being the first carrier-launched aircraft to hold the worlds absolute speed record at 752.943 miles per hour. It was also the first fighter aircraft of the United States Navy as well as the United States Marine Corps that could surpass Mach 1 in level flight. The aircraft never entered warfare and was the final fighter aircraft manufactured by the Douglas Aircraft Company before the merging with McDonnell Aircraft. 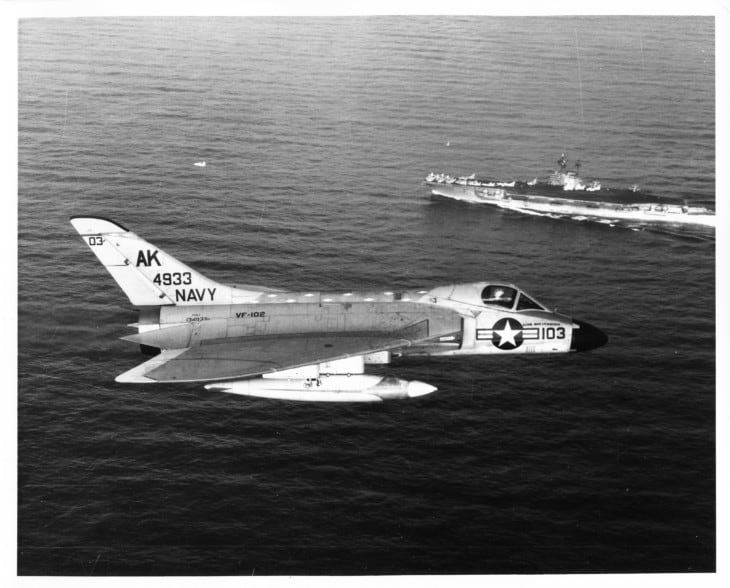 In 1947, the F4D Skyray was developed to target the need of the United States Navy for a fighter aircraft that was capable of interception and could smash a rival aircraft at a 50,000 feet altitude in just five minutes after the alarm started to sound. The USN also looked for an aircraft that succeeded the designs and studies of Alexander Martin Lippisch, a German aeronautical engineer and pioneer of aerodynamics.

The F4D Skyray featured a delta wing configuration with stretched, acutely-swept, rounded wings. It had a wingspan of 10.21 meters and a wing area of 51.7 square meters. The wing roots were thick which had the air intake that ensured smooth airflow into a single turbojet engine. Fuel was lodged in both sides of the wings and in under the fuselage. Slats were incorporated to enable the wing to operate at a higher angle of attack, and tailerons that unite the elevator functions for pitch control and the aileron for roll control.

The aircraft was initially planned to be powered by the Westinghouse J40, however, the manufacturing company had a conventional perspective and the supposed-to-be engine showed issues and was finally canceled. Instead, the F4D Skyray was fitter with the more powerful Pratt and Whitney J57 axial-flow afterburning turbojet engine. It had a two-spool 16-stage axial compressor and produced a maximum dry thrust of 10,200 lbf.