The Douglas F3D Skynight was designed and produced by the Douglas Aircraft Company as a twin-turbojet, mid-wing fighter aircraft introduced in the early 1950s. It was in service with the United States Navy and the United States Marine Corps as a carrier-based all-weather night fighter with its primary mission to spot and destroy opponent aircraft at night. 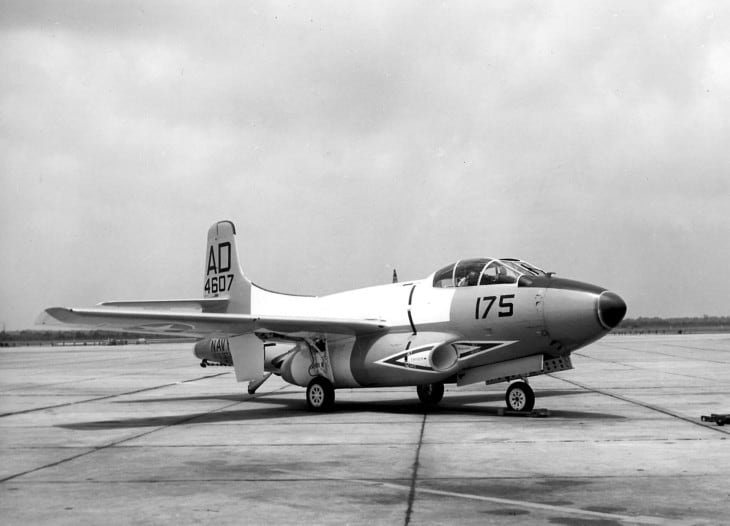 In 1945, the Douglas Aircraft Company designed a night fighter to meet the requirements of the United States Navy for a carrier-based night fighter powered by jet engines with a built-in powerful radar system. The sizeable air intercept radar system fitted on the aircraft was designed by Edward Henry Heinemann and his team.

It featured tandem seating for the pilot and the radar operator. The outcome was a fighter aircraft with a spacious and deep fuselage. In lieu of ejection seats, the Skynight was designed with an escape tunnel, the same with the one used in the A-3 Skywarrior.

On March 23, 1948, the prototype aircraft XF3D-1 took to the air for the first time at Douglas’ El Segundo facility piloted by Russel Thaw. Additional flight testing took place at El Segundo until October of the same year. Three prototypes were brought to Muroc Air Force Base in Southern California to perform service trials.

The prototypes were fitted with two Westinghouse J34-WE-24 engines rated at 3,000 lbf each located under the wing roots. In June 1948, a production contract for twenty-eight F3D-1 was secured. On February 13, 1950, the first production aircraft F3D-1 conducted its maiden flight. After a year, on February 14, 1951, the second production version designated as F3D-2 took its first flight.

The version featured wing spoilers to reduce lift, and an autopilot. The American manufacturing company Westinghouse had a contribution to the version by supplying an enhanced AN/APQ-36 aircraft fire control radar and J34-WE-36 turbojet engines. The engine was a turbojet type with a single-spool 11-stage axial compressor, annular combustors, and 2-stage turbine.