The Douglas A-4 Skyhawk was developed for the US Marine Corps and US Navy in the early 1950s. It is a single-seated carrier-capable well-lit fighter plane. The sole turbojet, delta winged craft was made and manufactured by Douglas Aircraft Company. It was initially designated as the A4D under the pre-1962 designation structure of the US Navy. 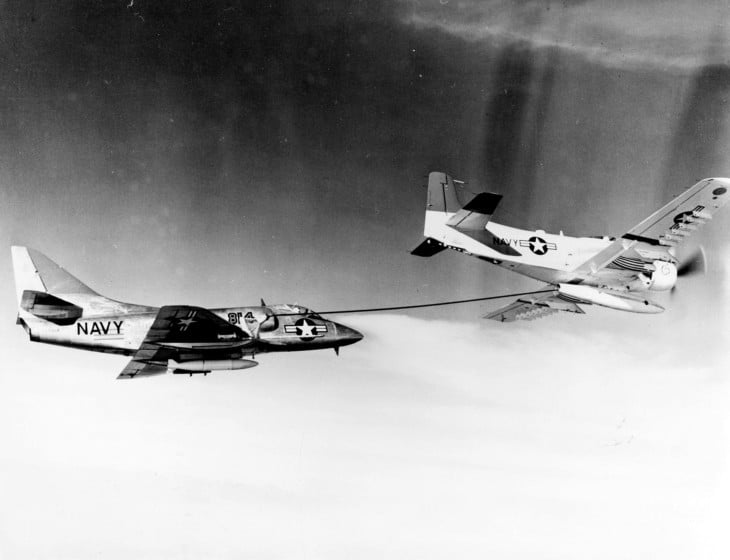 Blog posts that mention the Douglas A-4 Skyhawk:

Douglas Heinemann made this aircraft as he opted for a design that would reduce the plane’s complexity, weight, and size. This plane weighed only half of the specification of the navy. It has a compact and unfolded wing for carrier stowage.

The first production of this aircraft costs more or less $860,000 each. The pint-size Skyhawk soon got the nicknames “Kiddiecar”, “Scooter”, Tinker Toy Bomber,” and “Bantam Bomber” with an account of its quick performance and speed “Heinemann’s Hot-Rod.” On October 15, 1955, the XA4D-1 model set a worldwide speed record of 695.163 miles per hour.

The Douglas A-4 Skyhawk has a maximum takeoff weight of 11,100 kg or 24,500 pounds. It is considered a lightweight plane and has a concentrated speed of over 600 miles/hour. This aircraft also has five hardpoints that provide protection to any types of bombs, missiles, and other weapons. It is also capable of releasing nuclear weapons with a use of loft technique and a low altitude bombing scheme.

This aircraft was initially powered by the Wright J65 turbo plane engine. It used the A-4E and Whitney & Pratt J52.

The Douglas A-4 Skyhawk has original, modified, upgraded, and export variants. Some of its original versions are the XA4D-1, YA4D-1, and A4D-1. The A4D-2 version has a strengthened plane and added air-to-air refilling capabilities, flight control systems, and enhanced navigation. It also has a provision for AGM-12 missiles. Another original variant is the A4D-2N, with a night/adverse climate type of A4D-2. For its proposed advanced variants, this aircraft also has a version called A4D-3 and A4D-4.

The aircraft’s modified, upgraded, and export version also comes with different types. One of these is the TA-4E, with dual A-4Es modified as a model of a trainer variant. Another is the EA-4F, with four TA-4Fs renewed for ECM training. Other variants include A-4L, OA-4M, A-4P, A-4Q, and a lot more.

The Douglas A-4 Skyhawk played significant roles in the Yom Kippur War, Vietnam War, and Falklands War. Fifty years after the plane’s first flight, almost 3,000 produced aircraft remain in service with various air arms all over the globe, including the aircraft carrier of the Brazillian Navy called Sao Paulo.

Out of 20 A-4Gs, ten were lost during the type mission with the RAN. This provided the Skyhawk with a depleted safety record. However, the superior loss frequency was partly attributable to the central threat involved in handling from a plane carrier. Unfortunately, two pilots were killed in this incident.

In the mid-1970s, four Skyhawks were also destroyed. The original A-4G was crashed into the sea because of the engine malfunctioned system. The pilot was ejected and saved by a RAAF plane.