The Douglas A-1 Skyraider was developed and produced by Douglas Aircraft Company as a single-seat attack aircraft in service from the late 1940s until the early 1980s. It first flew in March 1945 and was introduced in 1946. The Skyraider saw service with the United States Navy, United States Air Force, British Royal Navy, French Air Force, and Republic of Vietnam Air Force. It was retired in 1985 with the Gabonese Air Force. The aircraft was produced from 1945 to 1957 with a total number of 3,180 Skyraiders built. 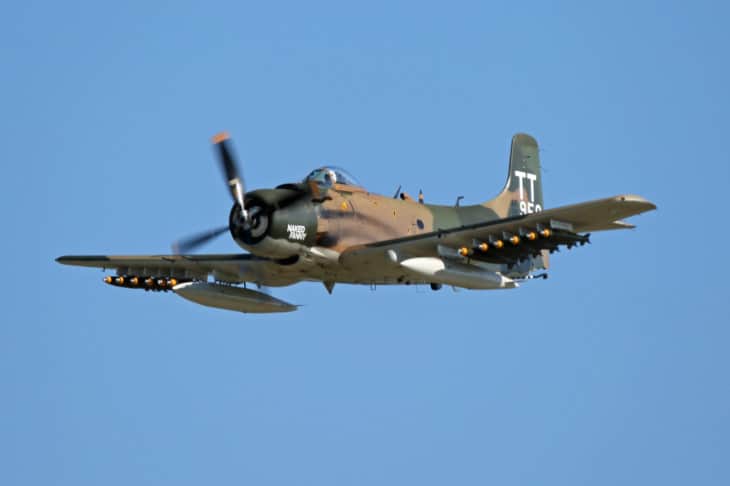 The A-1 Skyraider was developed out of the requirement from the United States Navy during the Second World War to build a carrier-based, single-seat dive/torpedo bomber that could fly at longer ranges and with better performance. The aircraft was designed by Ed Heinemann and manufactured by the Douglas Aircraft Company.

On July 6, 1944, orders for prototypes designated as XBT2D-1 were placed. On March 18, 1945, it performed its maiden flight, and in April of the same year, the United States Navy started to evaluate the prototype at the Naval Air Test Center. In December 1946, it was redesignated as the AD-1, and the initial production aircraft was designated as the VA-19A.

The aircraft is powered by a single Wright R-3350-26WA Duplex-Cyclone engine. It is a twin-row eighteen-cylinder radial engine with two pushrod valves per cylinder, a two-speed single-stage supercharger, Chandler-Evans downdraft carburetor fuel system, a dry-sump oil system, and an air-cooling system. It produces a maximum thrust of 2,700 hp and drives a four-bladed Aeroproducts constant-speed propeller.