The Douglas DC-4 was designed and produced by the Douglas Aircraft Company after the DC-3. Unlike its predecessor, it was a four-engine aircraft with tricycle undercarriage introduced in 1942 with United Airlines. 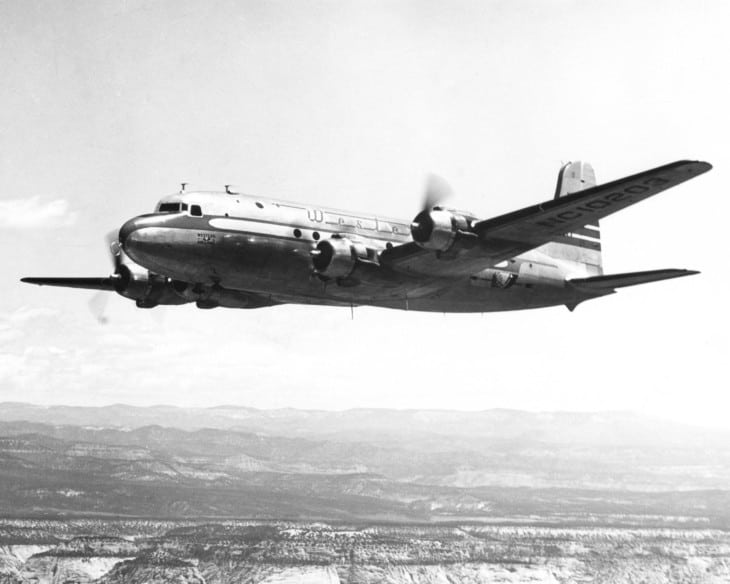 In 1935, the Douglas Aircraft Company developed the descendant of Douglas DC-3 as a response to a requirement from United Airlines. The new airliner was designated as Douglas DC-4 with twice the capacity of its antecedent and powered by four radial piston engines. On June 9, 1983, the prototype conducted its maiden flight. It was mostly built out of aluminum alloy with a length of 29.74 meters and the low wing had a wingspan of 42.14 meters.

From May 1942 to August 1947, a total of 1,245 were built; that included seventy-nine postwar aircraft built from January 1946 to August 9, 1947. The last aircraft was delivered to South African Airways. During the 1950s, Transocean Airlines in California was the largest civilian operator of the type. The DC-4s and C-54s were extensively used in the Berlin Airlift between June 1948 to September 1949 where 330 of this type were used to carry supplies to the people.

The aircraft were purchased by different countries such as Spain, the Netherlands, Denmark, Norway, and Sweden, Switzerland, France, Belgium, Cuba, Colombia, Argentina, Venezuela, and South Africa. Two DC-4s are still employed by SkyClass Aviation as of June 2020. They are used for charter operations, possessed by the South African Airways Museum Society.

The DC-4 was powered by four Pratt and Whitney R-2000 Twin Wasp engines. It is a twin-row radial 14-cylinder engine with an air-cooling system and a Stromberg carburetor fuel system. Each engine produced a maximum takeoff thrust of 1,450 horsepower and 1,100 horsepower at 14,000 feet. It drives a 3-bladed Hamilton-Standard Hydromatic constant-speed propellers.