The Douglas DC-6 was produced by the Douglas Aircraft Company between 1946 to 1958. It was a cargo aircraft powered by piston engines and initially planned as a military transport toward the end of the Second World War before it was redeveloped after the war to contest in the commercial transport market with the four-engine Constellation built by Lockheed. 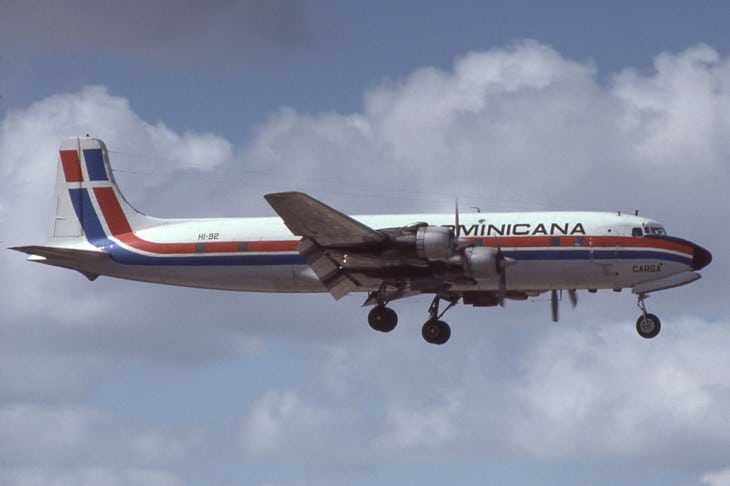 In 1944, the DC-6 project was designated by the United States Army Air Force as the XC-112. The Army had a requirement for a stretched and pressurized type of the C-54 Skymaster powered by more reliable engines. On February 15, 1946, the XC-112A prototype conducted its maiden flight, however, the Second World War had ended which led to the cancellation of Army Air Force’s requirements, and later converted the aircraft to YC-112A which were sold in 1955.

The aircraft manufacturer Douglas Aircraft Company converted the design into a civilian aircraft which was around 2 meters longer compared to the previous DC-4. On June 29, 1946, the DC-6 civilian transport took its first flight, being kept by the company for testing. On November 24, 1946, the aircraft were delivered to its first airline customers, American Airlines and United Airlines.

In 1947, the DC-6 was grounded due to a series of inflight fires that occurred. In 1949, several airlines in the United States operated the aircraft including United Airlines, American Airlines, National Airlines, Delta Airlines, and Braniff International Airways. In 1952, the DC-6B version was used by Pan American Airways for their transatlantic tourist-class routes.

The manufacturing company produced four versions of the DC-6: the standard DC-6 was the initial production version with two types- the DC-6-1156 was a fifty-three to sixty-eight-seater domestic version while the DC-6-1159 was a forty-eight to sixty-four-seater trans-ocean version; the DC-6A was a freighter version with a stretched fuselage, forward and aft cargo doors, and was initially named as Liftmaster; the DC-6B was an all-passenger version of the DC-6A lacking the cargo doors. The DC-6B-1198A was a sixty to eighty-nine-seater domestic version while the DC-6B-1225A was a forty-two to eighty-nine-seater trans-ocean version; the DC-6C was a convertible cargo and passenger version.