The Douglas DC-3 was a larger and enhanced variant of the DC-2 developed by the Douglas Aircraft Company. The DC-3 is the first successful commercial propeller-driven airliner in the world and was also smoothly configured for military service throughout the Second World War. 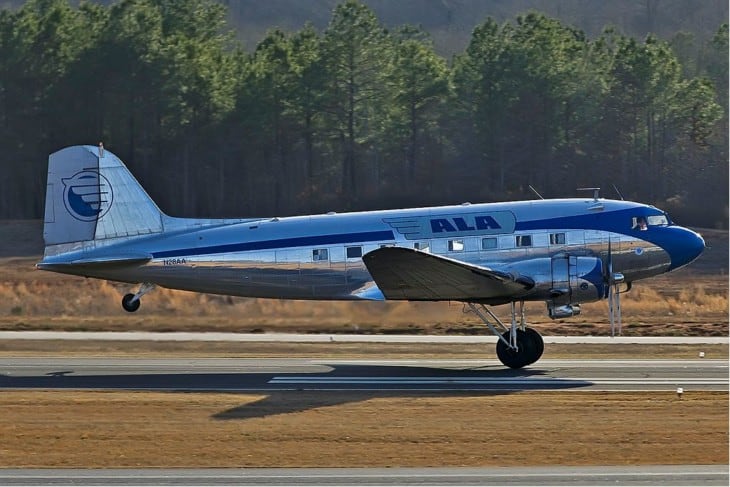 The DC-3 was the pinnacle of a development effort that started from the invitation of the Transcontinental and Western Airlines to Donald Douglas to build an all-metal aircraft powered by three engines that would be capable of taking off safely from whichever airport on the airline’s primary routes with one non-operating engine. Douglas initially designed the DC-1 in 1933 to compete with the Boeing 247 of the United Airlines. The DC-1 was followed by the DC-2 in 1934.

On December 17, 1935, the initial civilian variant designated as Douglas Sleeper Transport took its maiden flight operated by the chief test pilot, Carl Anson Cover. It had a 2.3-meter-wide cabin, and the variant that could accommodate twenty-one seats rather than the conventional fourteen to sixteen sleeping berths was designated as DC-3.

A total of 16,079 aircraft including all military versions were produced; 607 of these were of civil versions. The production of DST and civil DC-3 versions ended in mid-1941 and early 1943 respectively, notwithstanding that dozens of these versions acquired by airlines that were built from 1941 to 1943 were bounded to enter service with the United States military while still under production. Military variants were built up till the end of World War II. In 1949, the DC-3S or Super DC-3 powered by Pratt and Whitney R-2000 or Wright R-1820 Cyclone engines was launched. Five of this version were produced with three being used for commercial transport.

The DC-3A version had an exterior length of 19.7 meters, an exterior height of 5.16 meters, a tail height of 4.1 meters, and a fuselage diameter of 2 meters. It had a wheelbase of 10.9 meters, a wingspan of 29 meters, and a wing area of 91.7 square meters. The DC-3A was powered by two Pratt and Whitney R-1830-S1C3G Twin Wasp 14-cylinder air-cooled two-row radian piston engine rated at 1,200 horsepower each. It was also equipped with three-bladed Hamilton Standard 23E50 propellers.