The Douglas C-74 Globemaster was a heavy-lift cargo transport developed by the Douglas Aircraft Company after the attack on Pearl Harbor. The aircraft was powered by four Pratt and Whitney R-4360-69 Wasp Major rated at 3,250 horsepower each. 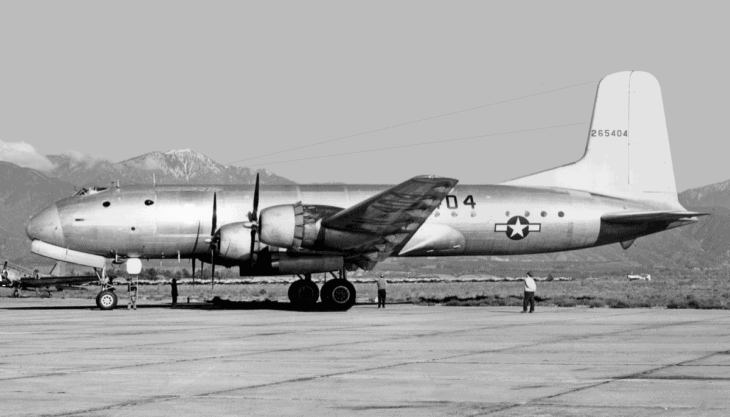 In early 1942, the American Douglas Aircraft Company started the study of transport that could carry out the global logistic requirements of the United States military. The project group of the aircraft made the DC-4 a basis and focused on amplifying its performance.

The design concentrated on building a basic aircraft that could carry a great amount of the Army’s sizeable equipment such as light tanks for rapid movement to swiftly move in and out of combat and outmaneuver heavy main battle tanks. It was also designed to accommodate two 105-mm howitzers including its towing vehicles, two heavy angle dozers, and more compact utility vehicles.

On September 5, 1945, the C-74 conducted its maiden flight at Long Beach piloted by Ben O. Howard and carried on for seventy-nine minutes. The C-74 could accommodate thirteen crew members, 125 troops, 115 stretchers with medical staff, or up to 21,840 kg of cargo. It had an exterior length of 37.8 meters, an exterior height of 6.7 meters, a tail height of 13.34 meters, and a fuselage diameter of 4.1 meters. The wheelbase is 12 meters and the wingspan is 52.81 meters.

The aircraft was powered by four Pratt and Whitney R-4360-69 Wasp Major. It is a 28-cylinder four-row radial piston engine with two popper valves per cylinder, gear-driven single-stage variable-speed centrifugal-type supercharger, and an air-cooled cooling system. Each engine produces a maximum thrust of 3,250 horsepower.

It was also equipped with 4-bladed Hamilton-Standard or Curtiss-Electric fully-feathering, reversible constant-speed propellers. It had a maximum speed of 285 knots at 10,000 feet and a cruise speed of 184 knots. The range was 3,000 nautical miles and the ferry range was 6,300 nautical miles. It could fly up to 21,300 feet and could climb at a rate of 2,605 feet per minute.