The Douglas C-54 Skymaster is a military transport aircraft of the United States Army Air Force during the Second World War and the Korean War. It was a derivative of the civilian airliner DC-4 and was powered by four Pratt and Whitney radial engines. Aside from cargo transportation, the C-54 Skymaster was also used to transport presidents and prime ministers, as well as military staff. 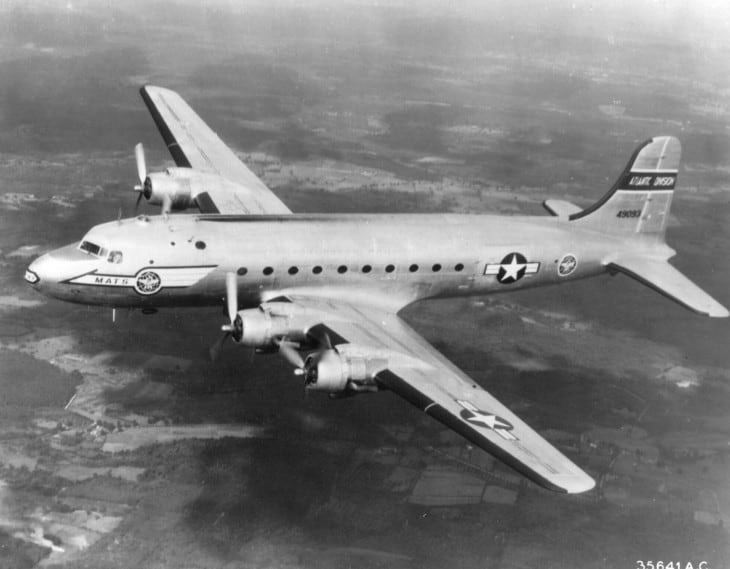 Along with the emerging entry of the United States into the Second World War, the War department succeeded the provision orders for the civilian airliner DC-4 and assigned them to the United States Army Air Force designated as the C-54 Skymaster. On February 14, 1942, the first C-54 took its maiden flight in Santa Monica, California.

In order to target the military needs, the first civil production type was equipped with four extra auxiliary fuel tanks located in the main cabin which decreased the passenger seats to twenty-six. The first military version C-54A was equipped with a strengthened floor and airframe, increased fuel capacity, and a cargo door incorporated with a hoist and winch.

In February 1943, delivery of the first C-54A commenced. In March 1944, the C-54B version was introduced. The two of the cabin tanks were discarded to give way to the integral fuel tanks attached in the outer wings which caused increase fuel capacity in the wings. The design also allowed forty-nine seats or sixteen stretchers to be accommodated.

The C-54C version which was used for presidential transport featured a fuselage based on C-54A incorporating four cabin fuel tanks, and wings based on C-54B incorporating built-in tanks to obtain the maximum range of the aircraft. In August 1944, the most typical version C-54D entered into service. It was derived from the C-54B but with newly fitted R-2000-11 engines. The C-54E featured several enhancements including the fuel tanks and provision for a fast passenger to cargo conversion.

The Douglas C-54G was powered by four Pratt and Whitney R-2000-9 Twin Wasp 14-cylinder air-cooled radial piston engines with a rated thrust of 1,100 horsepower each at 7,500 feet. It was also equipped with three-bladed constant-speed fully-feathering propellers.