The Douglas C-133 Cargomaster is a large turboprop military transport aircraft produced by the Douglas Aircraft Company from 1956 to 1961. It was primarily designed to be in service with the United States Air Force and it was the sole production strategic airlifter powered by turboprop engines of the USAF. 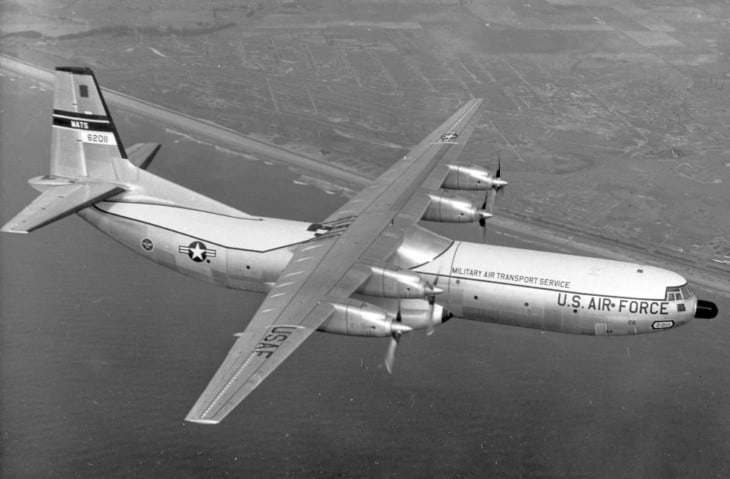 The Douglas C-133 Cargomaster was built to target the specification for a new strategic transport of the United States Air Force Logistic Carrier Support System. Unlike with its predecessors, the aircraft had a significantly different feature such as a high-mounted wing with a wingspan of 54.78 meters and a wing area of 248.3 square meters, incorporation of external blister fairings on either side for the undercarriage with a wheelbase of 18.8 meters, and cargo door at the rear and side part of the aircraft. The C-133 had a pressurized and heated cargo hold which is 27-meter long and 3.7-meter high.

The Douglas Aircraft Company did not build any prototypes for the Cargomaster. It went straight as a production aircraft designated as C-133A. On April 23, 1956, the first C-133A conducted its maiden flight. In August 1957, the delivery of the first Cargomasters to the Military Air Transport Service (MATS) commenced and started to fly in MATS air routed in different parts of the world. In 1971, the C-133 Cargomaster retired. Thirty-five C-133A and fifteen C-133B were built and were in service with the United States Air Force.

The aircraft was designed with enlarged tail and side doors as well as a bigger and open cargo area. The C-133A bore several heavy and sizeable loads, which include Atlas and Titan intercontinental ballistic missiles. However, the aircraft was not precisely built to carry ICBMs. The C-133B had a modified rear cargo door that could open to the side to load ICBM easier.