The Douglas B-66 Destroyer was a light bomber developed by Douglas Aircraft Company. Introduced in 1956, it was primarily built for the United States Air Force (USAF) and mainly derived from the jet-powered strategic bomber A-3 Skywarrior. The B-66 was powered by twin Allison turbojet engines rated at 10,200 lbf each. 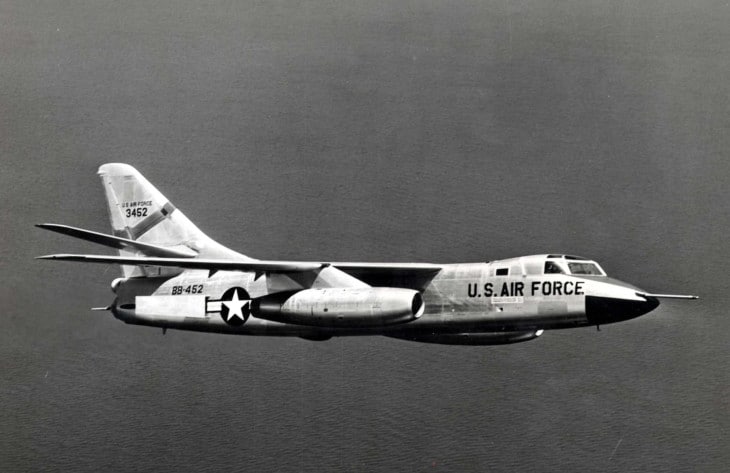 Based on the A-3 Skywarrior, the B-66 Destroyer featured a slab-sided fuselage with an exterior length of 22.9 meters. The height was 3.7 meters and the fuselage diameter was 2 meters. It had a high-mounted swept wing with a wingspan of 22.1 meters and a wing area of 72 square meters. The tail had a sizeable area vertical tail fin with a tail height of 7.19 meters and conventional horizontal stabilizers. The aircraft was equipped with a fully retractable landing gear with a wheelbase of 8.5 meters.

The B-66 Destroyer was powered by two Allison J71-A-11 single-spool turbojet engines. It was an afterburning turbojet with a 16-stage axial compressor, cannular combustors with ten flame tubes, 3-stage turbine, and pressure spray oil system. Each engine produced a maximum thrust of 10,200 lbf. The aircraft had a maximum speed of 548 knots at 6,000 feet and a cruise speed of 459 knots. The combat range was 782 nautical miles while the ferry range was 2,146 nautical miles. It could fly up to 39,400 feet and could climb at a rate of 5,000 feet per minute.