The Douglas A-3 Skywarrior was built and manufactured by the Douglas Aircraft Company as a jet-powered strategic bomber for the United States Navy. It was introduced to the public in 1956. The Skywarrior was produced from 1956 to 1961 with a total of 282 aircraft built. It was retired in September 1991. 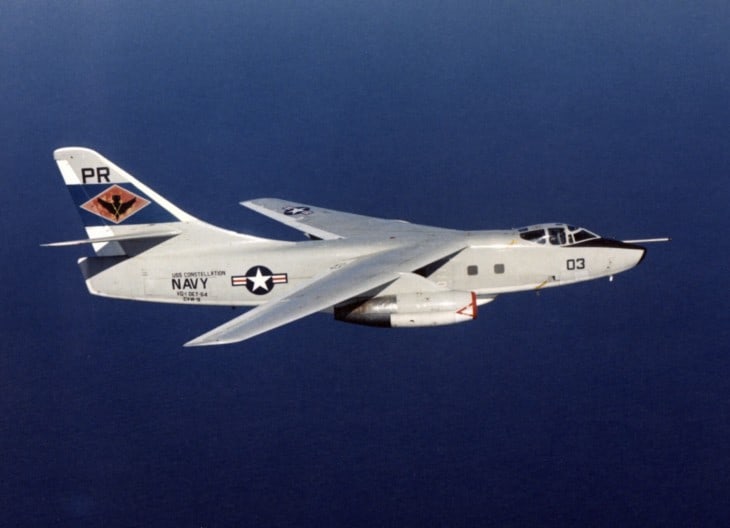 On October 28, 1952, the Skywarrior prototype designated as XA3D-1 conducted its first flight. The A-3 Skywarrior was produced in several versions.

The A3D-2 (A-3B) is a definitive production bomber aircraft. It is equipped with a stronger airframe with an external length of 23.27 meters, an external height of 3.3 meters, and a width of 2.1 meters. The wheelbase is 9.2 meters. The wings have a moderately greater area of 75.4 square meters compared to the standard 72 square meters. It also has a 36 degree swept. wing and a wingspan of 22.10 meters.

The aircraft is fitted with two more powerful Pratt and Whitney J57-P-10 turbojet engines. It is an afterburning turbojet with an all-axial, nine-stage low-pressure and seven-stage high-pressure compressor, cannular combustors, and an all-axial, single-stage high-pressure and two-stage low-pressure turbine. Each engine produces a maximum dry thrust of 10,500 lbf and 12,400 lbf if with water injection.

The Skywarrior can be loaded with two 20 mm M3L autocannon located in the tail turret. It is also armed with 5,800 kg of free-fall bombs or mines, including any combination of twelve 230 kg Mark 82 unguided bombs or six 450 kg Mark 83 low-drag general-purpose bombs, eight 730 kg armor-piercing bombs or four 910 kg bombs, and one free-fall nuclear weapon. The aircraft also features an avionics system such as AN/ASB-1A early radar, AN/ASB-7 bomb-director, and defensive electronic countermeasure gear.