The Douglas A-1 Skyraider, previously called AD Skyraider, had an amazingly long and prosperous career. It is an American single-seat fighter plane that saw service from 1940 to 1980. It became a propeller-driven, piston-powered anachronism in the jet age and was named “Spad.” 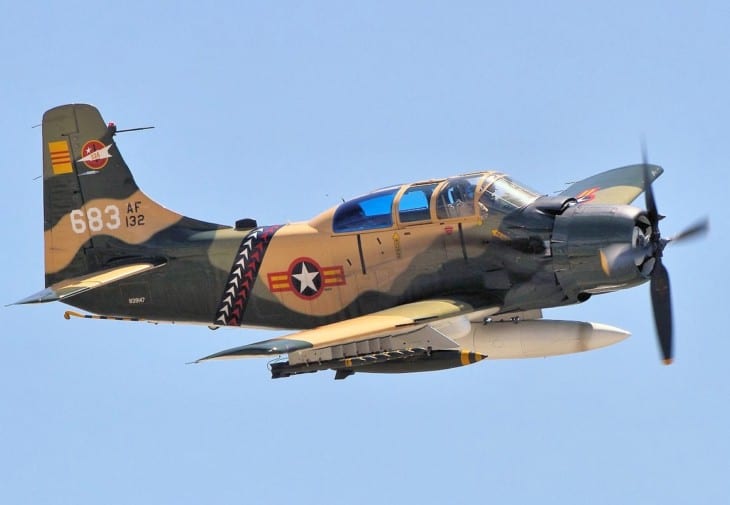 This aircraft was operated by the US Navy, US Air Force, and US Marine Corps. It was also a saw service with the Republic of Vietnam Air Force, French Air Force, British Royal Navy, and many more. It was renamed in US service until the 1970s.

The Douglas A-1 Skyraider was made during World War II. It was made to meet the requirements of the US Navy for a single-seat, carrier-based, high-performance dive, long-range, and torpedo bomber. This aircraft was projected by Ed Heinemann, who was based at Douglas Aircraft Company. Its prototypes were released on July 6, 1944, dubbed as XBT2D-1.

On March 18, 1945, the XBT2D-1 made its first flight. One month after, the US Navy started the evaluation of the plane at the Naval Air Test Center. In 1946, the delivery of the pilot production plant to a navy squadron was named VA-19A.
Cockpit / Flight Deck

The study claimed that for every 45 kilograms of weight drop, the takeoff was reduced by 8 feet, its combat radius heightened by 35 km, and its rate of climb boosted by 18 ft/min. This study was issued after Heinemann started designing the XBT2D-1.

The Douglas A-1 Skyraider has several versions, starting with the version called AD-1. Then, it was named AD-2 and AD-3 with several minor improvements. Afterward, it was named AD-4 with a more powerful engine known as R-3350-26WA. The AD-5 was pointedly widened, providing two crew to occupy the space side-by-side. Another version is the AD-1Q with a dual seat for the crews. The AD-3N, on the other hand, has a 3-seater, while the AD-5N came with 4-seater with a night fight version. The final version of the Douglas A-1 Skyraider is AD-7.

Other versions include XAD-1W, AD-2D, AD-2QU, and AD-4B. Another version you shouldn’t miss to know is the D-6 (A-1H). It has a single seat with a centerline station, three dive brakes, and a bomb ejector.

The Douglas A-1 Skyraider was used by the US Navy over Vietnam and Korea. The A-1 was the main close air protective aircraft for the VNAF and USAF during the Vietnam War. It was also renowned for taking hits and keep on track. In the mid-1960s, it was replaced by the Grumman A-6 Intruder as the main medium attack aircraft of the Navy.

The Douglas A-1 Skyraider received several nicknames like Super Spad and Spad. This aircraft was also featured in some Vietnam movies. The typical examples of these are Flight of the Intruder (1991), The Green Berets (1968), and We Were Soldiers (2002).

The aircraft also played a computer-operated role in the episode named “Rescue Down” in 2007. Above all, Skyraiders were featured in the famous Korean film “The Bridges at Toko-Ri (1953).