The world’s first turboprop aircraft equipped with single levers cockpit and new cabin, the twin engine Nextant G90XT is a remanufactured version of the Beechcraft King Air with modernized features. It has a maximum power of 845 horsepower and can fly up to 1,285 nautical miles. 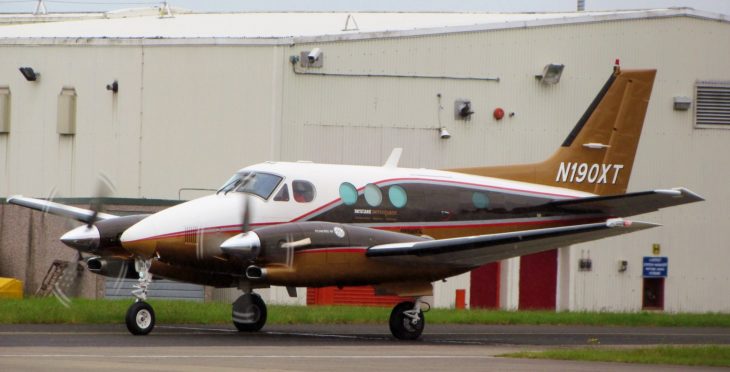 The Nextant G90XT is a rebuilt and meticulously improved version of the Beechcraft King Air C90 series, an American utility aircraft produced from 1964 up to the present.

In October 2016, the initial flight tests of the Nextant G90XT were accomplished four times with more or less ten flight hours in total. By the end of the year, the turboprop aircraft received its final certification for Electronic Engine and Propeller Control (EEPC) from the European Aviation Safety Agency (EASA).

On the first few month of 2017, deliveries of the aircraft took place.

The aircraft cabin can seat up to seven or eight passengers. It has a cabin length of 3.84 meters, height of 1.47 meters and width of 1.42 meters. The cabin volume is 6.65 cubic meters. It has a baggage area of 1.4 cubic meters with maximum baggage weight of 159 kg.

The quieter cabin of the Nextant 690XT with noise level of below 9.5 decibels has a vapor cycle air conditioning system wherein the refrigerant absorbs all the heat inside the cabin and releases it into the outside air.

The aircraft can be customized depending on the preference of the user. It can be a VIP transport, a mixed passenger aircraft, a cargo utility aircraft, or even a MEDEVAC (medical Evacuation) or be utilized in air ambulance operations.

The Nextant G90XT is equipped with Regent flight deck combined with Garmin G1000 integrated flight instrument system with two Liquid Crystal Display (LCD) units- one serves as the primary flight display and the other as the large multi-function display, and an integrated communication panel that suits between the two. It also has a third display unit that serves as a copilot primary flight display, an alphanumeric keyboard, and an integrated flight director or autopilot.

The primary flight display has the basic flight instruments like the altimeter airspeed indicator, heading indicator, altitude indicator and course deviation indicator. It can be utilized in flight plan activation and is capable of presenting all data shown on the multi-function display. The multi-function display usually presents an engine instrumentation on the left side and a moving map on the right side. It also shows information on nearby airports and navigational aids, terrain awareness, XM satellite radio, programming of flight plans, set up menus, and Global Positioning System (GPS) Receiver Autonomous Integrity Monitoring (RAIM) prediction.

The cockpit of the Nextant G90XT is equipped with modern aircraft avionics system workload reduction of the pilot such as the full auto-start capability, direct interface, and the latest Electronic Engine Control (EEC) system that enables single lever power technology. The electronic engine control permits single lever power control of the engine as well as the propeller. It lets the engine to perform at maximum efficiency under a certain condition and it does all the decisions until the pilot decided to step in.

A Garmin GFC700 digital autopilot is also one of the features of the aircraft. It is an enhanced Altitude and Heading Reference System (AHRS)-based automatic flight control that has autopilot, flight director, yaw damper, automatic and manual trim capabilities.

The Nextant G90XT is powered by two GE H75-100 turboprop engines with intensified performance and economy compared to the previous turboprop of its kind. Each engine has a maximum thrust of 845 horsepower and has the capability to operate even at higher temperature and pressure. It has a two stage axial and one stage centrifugal compressors.