Designed to contest with narrow body airliners such as Boeing 707 and Douglas DC-8, the Convair 880 is an American single-aisle jetliner manufactured by Convair. It is compact in size but flies faster compared to other competing aircraft of its kind. With a speed of 615 miles per hour, the Convair 880 has been recorded as the fastest jet transport in the whole world. 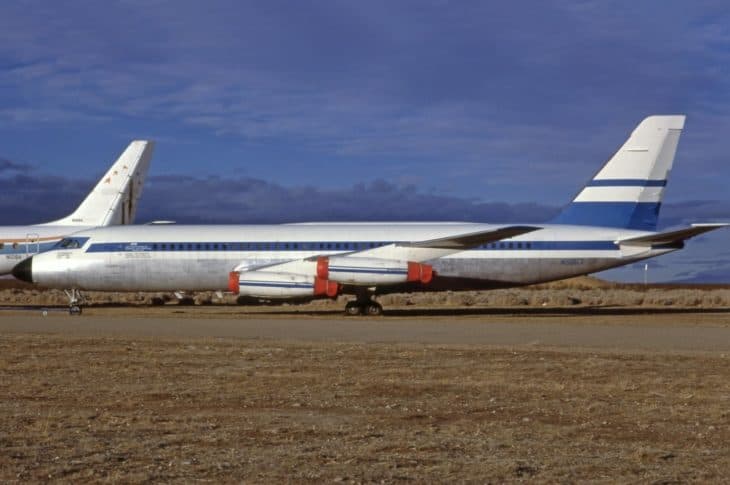 Blog posts that mention the Convair 880:

In April 1956, the aircraft manufacturing company Convair started to develop a medium range aircraft for commercial transport. The aircraft went through several renaming such as Skylark, Golden Arrow, and Convair 600 before it was renamed as the Convair 880.

The finishing assembly of the aircraft occurred in San Diego, California at the Convair headquarters.

On May 15 1960, the aircraft entered into commercial service with Delta Air Lines flying between Houston, Texas and New York. Some of the operators of the Convair 880 were Delta Air Lines, Cathay Pacific, Japan Airlines, Northeast Airlines, Swissair, Trans World Airlines and Venezuelan International Airways.

The Convair 880 was produced for only three years, from 1959 to 1962. There were 65 aircraft produced during its production run.

With a cabin length of 26 meters, the aircraft can seat up to 110 passengers on board in a five abreast seating. It has a cabin width of 3.27 meters and height of 1.8 meters.

Powered by four CJ805 turbofan engines from General Electric, the Convair 880 has a maximum thrust of 11,650 lbf each engine. The engine has a length of 4.79 meters with thrust reverser and a fan diameter of 80.3 centimeters.

On May 23 1960, a Delta Air Lines flight 1903 from Atlanta Municipal Airport crashed upon takeoff because of the aircraft’s nose that pitched up and banked steeply to the left before it crashed the ground and burst into flames. Four people on board were killed on the accident.

On August 26 1966, a Japan Air Lines flight from Haneda International Airport crashed due to uncontrollable left yaw while in a training flight. All of the four engines were separated, along with the aircraft’s nose and left main gear. The aircraft burst into flames killing all five people on board.

On November 20 1967, a Trans World Airlines flight 128 from Los Angeles International Airport fall short of the runway in an attempt to land in bad weather conditions. The aircraft crashed into several trees before it disintegrated and burst into flames. There were 82 occupants on board; 70 of them were killed on the accident.

On June 24 1969, a Japan Airlines flight 90 from Grant County International Airport crashed due to a simulated critical engine-out takeoff. The aircraft kept on yawing to the right until the engine number four hit the runway, following the aircraft’s crash before it burst into flames. Among five crew members, three were killed on the accident.

On June 15 1972, a Cathay Pacific flight 700Z from a stopover in Don Mueang International Airport crashed due to a bomb explosion in-flight. The bomb was concealed inside a passenger suitcase and exploded in the cabin that caused some seats to be ejected through a hole in the fuselage. There were 81 occupants on board; none of them survived the accident.