The F-15 ‘Eagle’ features a combination of out of the ordinary flexibility and acceleration, travel range, ammunition and enhanced avionics. The aircraft is equipped to pierce through opponent’s defense and exceeds and fights better than the opponent aircraft. It is outfitted with avionics system ammunition to observe, obtain, keep an eye on, and strike the opponent aircraft. 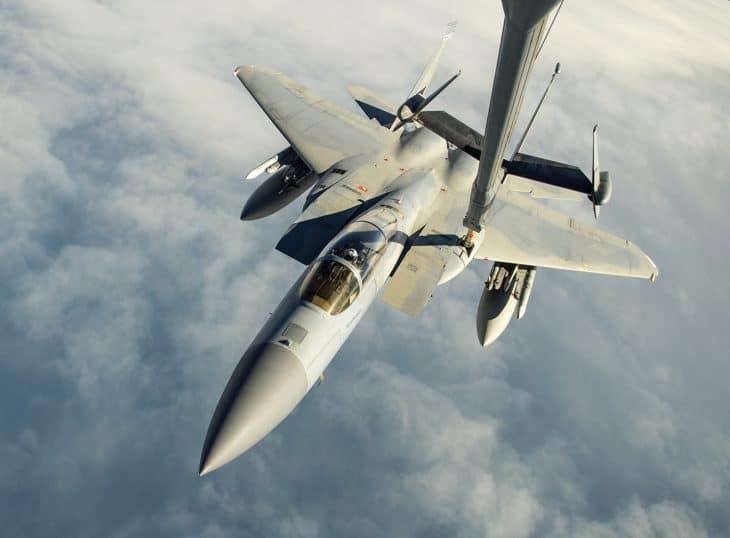 In 1967, the United States Air Force requested the design of McDonnell Douglas aircraft to fit the demand for a committed air superiority fighter.

In January 1976, the first F-15 Eagle intended for combat mission was deployed.

The F-15 Eagle is one of the most victorious present-day fighter aircraft, with a record of one hundred wins and zero loss in terms of aerial battle, with the major part of the kills by the Israeli Air Force.

The F-15 eagle is equipped with a semi-monocoque fuselage with a length of 19.43 meters. It has a large-cantilever wing mounted on the upper part of the fuselage, with a wingspan of 13.06 meters, a wing area of 56.5 square meters, and a 45-degree sweep-back angle.

Ailerons and flaps are positioned on the trailing edge. The empennage is made of metal and composite, the vertical stabilizers were made of aluminum and composite material honeycomb construction, and the horizontal stabilizer of composite. The aircraft is designed with a retractable tricycle landing gear, and has a wheelbase of 8.7 meters.

The maneuverability of the aircraft is based from low weight to wing area ratio with a high thrust to weight ratio, warranting it to pivot firmly without having to lose airspeed. At a definite speed, the dynamic thrust output of the engine is higher compared to the weight and drag of the aircraft, making it capable to speed up vertically.

The F-15 Eagle has a multi mission avionics system that makes it special among other fighter aircraft. This system features a Head Up Display (HUD) that provides data without needing the pilot to look away from their accustomed viewpoint, an advanced radar, an Inertial Navigation System (INS) with accelerometers and gyroscopes, flight instrument system, Ultra High Frequency (UHF) radio, a Tactical Air Navigation System (TACAN) that produces exact geographical fixing of the position of the aircraft, and Instrument Landing System (ILS) receivers.

The aircraft is also equipped with tactical Electronic Warfare System (TEWS) that aids the user in tactical decision making by collecting the information of the opponent’s communications with the use of an Electronic Support (ES) system. It has an Identification Friend or Foe (IFF) System that detects if the aircraft is an opponent, an Electronic Countermeasure (ECM) device to deceive detection systems, and a central digital computer.

The F-15 Eagle is powered by two P&WF100 after-burning turbofan engines. Each engine has a maximum thrust of 23,770 lbf with afterburner.

On May 1 1993, an Israeli Air Force F-15D crashed in mid-air with an A-4 Skyhawk while on a training flight. The right wing of the F-15 was nearly ripped off completely. In spite of the damage it went through, the pilot of the aircraft was able to get to a neighboring airbase and land smoothly. There were no recorded fatalities in this incident.

On March 26 2001, two United States Air Force F-15C collided while on a low flying training close to the summit of Ben Macdui in Scotland. Both of the pilots died on the accident.

On November 2 2007, an old Missouri Air National Guard F-15C crashed close to St. Louis, Missouri. Initial finding was because of the possibility of a structural failure of the aircraft.  There were no recorded fatalities in this incident. On the next day after the incident, the USAF suspended all non-mission critical F-15 operations.