The KC-10 Extender is an aerial refueling tanker aircraft manufactured by McDonnell Douglas. It is developed to produce increased global mobility for the United States Air Force (USAF) and other alliance forces. The aircraft is designed for cargo and passenger use. 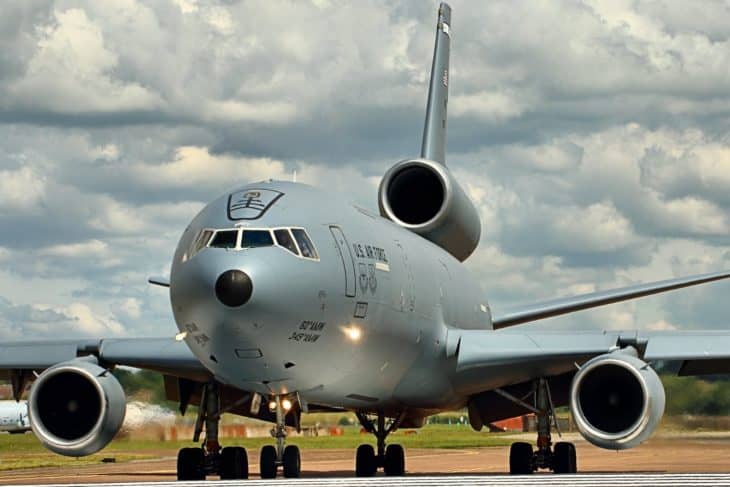 On July 12 1980, the KC-10 Extender took its maiden flight. In October of the same year, the first refueling operation took place.

In March 1981, the aircraft entered into service.

In November 1988, the sixtieth air tanker was delivered. Around sixty units of KC-10 tankers are in service around the globe.

The KC-10 is based from the former MD DC-10-30CF or convertible freighter. The aircraft is developed to target the demands of the United States Air Force.

In June 2010, the aircraft was enhanced with Communication, Navigation and Surveillance (CNS) and Air Traffic Management (ATM) system as part of a 216 million dollar contract with the United States Air Force.

In 2012, the enhanced KC-10 Extender went to the sky for its first flight testing.

In 2015, the last modified aircraft was deployed to the United States Air Force.

Refueling of the aircraft can be conducted using the flying boom method or a separate hose and drogue center-line system. The refueling operations were controlled with the use of a fly-by-wire system by the boom operator positioned at the rear part of the cockpit. The boom operator can observe and detect the receiver aircraft through a wide window. The receiver then acquires fuel at the rate of 1,100 gal per minute by the use of boom refueling method.

The KC-10 Extender is outfitted with wing-mounted aerial refueling pods. The receiving aircraft advances toward the air tanker and its probe meets the stretched out hose from the air tanker.

At the maximum rate of 470 gal per minute, the hose and drogue refueling system is able to transfer fuel to the receiving aircraft. There is an Automatic Load Alleviation System (ALAS) and Independent Disconnect System (IDS) that oversee the process of refueling to provide safety measures and aid during operations.

The aircraft has an external length of 55.35 meters, tail height of 17.7 meters and fuselage diameter of 6.02 meters.

For additional crew members during operations, optional seats and bunks can be added in the cockpit in a different configuration.