The McDonnell Douglas MD-83 is a longer-range variant of the MD-81 and MD-82. The MD-83 features increased weight, high performing engines, and added fuel capacity. 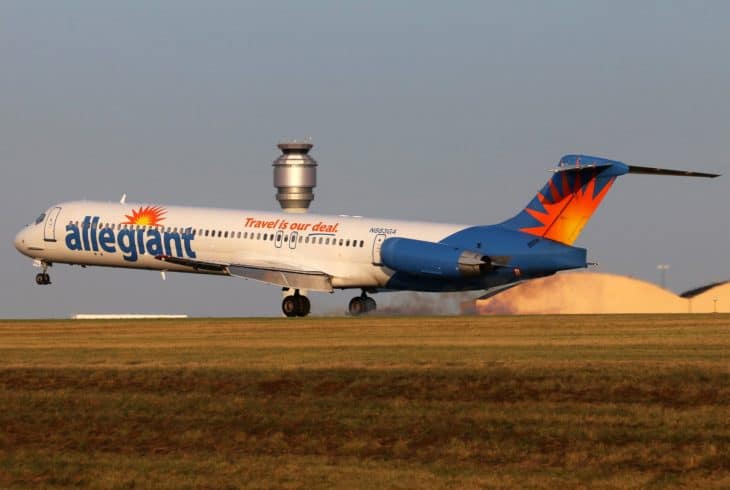 The McDonnell Douglas MD-80 series was developed and produced by McDonnell Douglas, an American aerospace manufacturing company and defense industry based in Berkeley, Missouri, United States.

In February 1985, the aircraft was first delivered to Alaska Airlines, an American airline based in SeaTac, Washington. Alaska Airlines’ initial order was the MD-82, afterwards the airlines’ first four aircraft were MD-83s. On the same month, it entered into service.

On December 28 1999, last delivery of the aircraft was recorded to Trans World Airlines (TWA), a major American airline between 1930 to 2001.

The MD-83 is derived from the MD-81 and MD-82 with an extended range. It is equipped with more powerful engines compared to the previous types, increase in weight, and added fuel capacity.

The aircraft has an external length of 45.02 meters, tail height of 9.2 meters and fuselage diameter of 3.35 meters. In order to manage the greater operating weights, the aircraft includes built up landing gear with brand new tires, brakes, and wheels. It has a wheelbase of 22.05 meters. The wing has a span of 32.85 meters. There were modifications to the wing skins, spar web on the front and spar cap in the elevator. The floor beams that support the seats of the passengers, galleys, and lavatories were strengthened. The panels that hold the auxiliary fuel tanks were enhanced.

The MD-83 is powered by two JT8D-219 turbofan engines supplied by Pratt and Whitney. With a maximum thrust of 21,000 lbf each, the engines were a bit more powerful compared to the previous models. It is also equipped with increased fuel capacity of 6,981 US Gal that is being carried in two 565 US Gal auxiliary tanks positioned in front and back of the center section.

The take off distance and landing distance are 2,052 meters and 1,585 meters respectively.

On January 31 2000, the horizontal stabilizer of an Alaskan Airlines flight 261 went out of control and crashed in the Pacific Ocean. There were eighty-eight people on board. No one survived this accident.

On November 30 2007, due to pilot’s spatial unawareness, an Atlasjet flight 4203 crashed in Turkey. Sixty-four passengers were killed in this accident.

On January 24 2012, a Swiftair flight 94 EC-JJS went through a wingtip strike upon landing at Kandahar Airport in Afghanistan. No injuries recorded in this incident.

On June 3 2012, because of engine failure, a Dana Air flight 992 5N-RAM crashed into a building in a residential area in Lagos, Nigeria. All of the people on board died on this accident, along with ten people on the ground.

On July 24 2014, an Air Algerie flight 5017 EC-LTV crashed around 50 minutes after it took off from Ouagadougou, Burkina Faso. All 110 people on board were killed on the accident.

On March 8 2017, an American Jet Charter N786TW slid off the runway Willow Run Airport while on a rejected take-off. This flight carried the Michigan men’s college basketball team. There were no recorded casualties in this incident.

On January 27 2020, a Caspian Airlines flight 6936 EP-CPZ overran the end of the runway of Mahshahr Airport in Iran. There were two recorded injuries in this incident.