The DC-10-40 is one of the variants of the DC-10 series, a trijet airliner created to transport passengers and cargo. Three Pratt and Whitney JT9D high bypass turbofan engines with 53,000 lbf maximum thrust supply power to the aircraft. 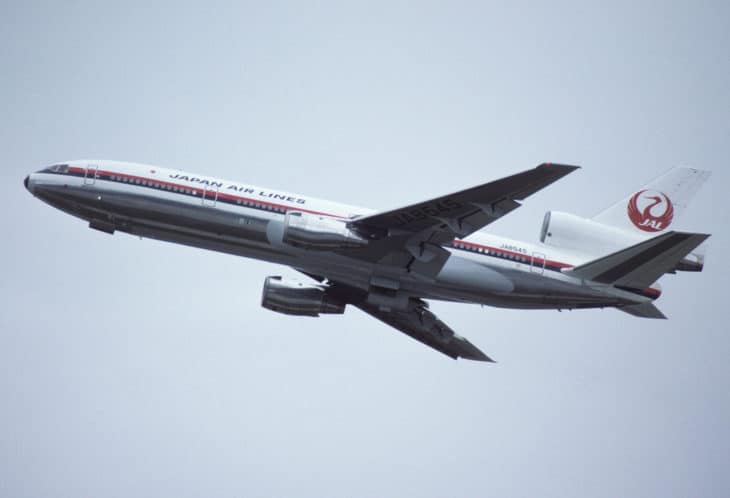 Initially named as DC-10-20, the DC-10-40 was relabeled because of a particular demand from Northwest Orient Airlines, a United States airline from 1926 to 2010. The said airline requested for an enhanced version with a greater maximum take off weight and more efficient engines.

The semi-monocoque fuselage of the DC-10-40 has a length of 55.5 meters and a diameter of 6 meters. The cantilevered wing has a wingspan of 50.4 meters and a wing area of 338.8 square meters. It composed of a primary box structure with a leading edge and trailing edge secondary structure.

Its fuel tanks were designed as rupture-resistant in the event of landing gear or flap separation. The aircraft’s tail with a height of 17.7 meters is constructed with metals and has a flexible horizontal stabilizer, right and left elevators, a stable vertical stabilizer, and a two section rudder. The horizontal stabilizer is rotated at the trailing edge and is equipped with power motors to adjust the angle of incidence.

The DC-10-40 has a cabin length of 36.7 meters, height of 2.41 meters and width of 5.7 meters. It is designed with conventional landing gear, brakes, nose wheel steering and anti-skid systems that are powered hydraulically. It has a wheelbase of 22.1 meters.

The aircraft is equipped with navigation equipment such as the Automatic Direction Finding (ADF) to classify the relative bearing from a radio beacon transmitting in a medium frequency or low frequency bandwidth, a Very High Frequency Omni-Directional Range (VOR) with a receiving DME unit to be aware of its position and stay on track by collecting radio signals, Instrument Landing System (ILS) that gives the pilot horizontal and vertical guidance  while on an approach to landing, and an Inertial Navigation System (INS) that calculates the current position, orientation, and velocity.

On January 31 2001, a Japan Airlines flight 958 (DC-10-40) experienced a mid-air incident as it almost crashed with Japan Airlines flight 907 (Boeing 747-400) due to inaccurate and inconsistent directions from the air traffic control. The incident resulted to 100 injured occupants of the Boeing 747 while no injuries reported on the DC-10-40. The flight 958 went onward and landed successfully to Narita International Airport in Japan.