The Hughes OH-6 Cayuse is a single-engine helicopter developed by Hughes Helicopter fitted with a four-bladed main rotor. It is used for personnel transport, escort and attack operations, and as a light observation helicopter. It was produced since 1965 and has been in service with its primary user, the United States Army. 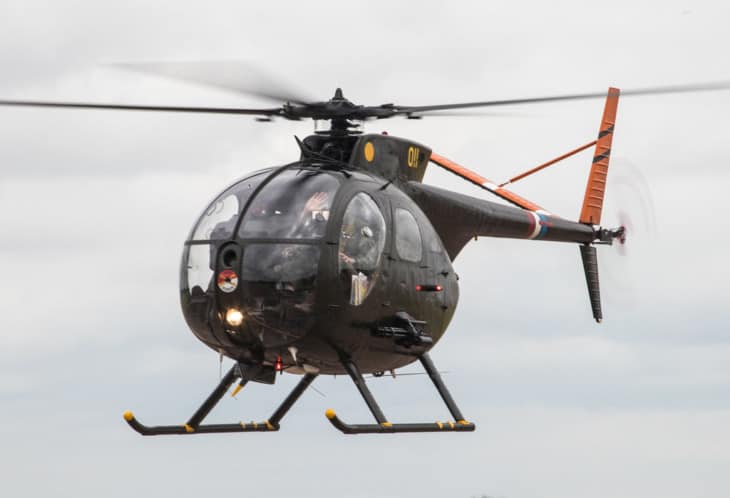 On October 14, 1960, a request for proposals (RFP) for Technical Specification 153 from the United States Navy Bureau of Weapons was issued for a Light Observation Helicopter (LOH) that can perform several roles such as personnel transport, escort and attack missions, casualty evacuation and observation. In January 1961, twelve aircraft manufacturers had responded, and Hughes Tool Co. Aircraft Division presented the Model 369.

On February 27, 1963, the Model 369 conducted its maiden flight. In 1962, the original designation YHO-6A was changed to YOH-6A when the United States Department of Defense made a Joint Electronics Type Designation System for all aircraft. Five aircraft were built, powered by an Allison T63-A-5A rated at 252 shaft horsepower. These aircraft were sent to the United States Army at Fort Rucker, Alabama to contest in opposition to the other ten prototype aircraft of Bell and Fairchild-Hiller. Hughes won against other competing companies and received a contract from the Army for production to start in May 1965. 714 initial orders were placed, then afterward raised to 1,300 with a possibility to increase to 114 more. In 1966, the OH-6A entered service.

The OH-6A has an external length of 9.4 meters, a height of 2.47 meters to the top of the rotor hub, and a diameter of 1.45 meters. It can seat two passengers or four on the floor with rear seats folded or removed.

A single Allison T63-A-5A turboshaft powered the rotorcraft. It has a maximum thrust of 317 shaft horsepower or 252.2 shaft horsepower for takeoff and 214.5 shaft horsepower for maximum continuous. The main rotor diameter is 8.03 meters and the main rotor area is 50.60 square meters. It can fly up to 15,800 feet and can climb up to 2,067 feet per minute. The maximum cruise speed at sea level is 130 knots and the travel range is 330 nautical miles at 5,000 feet. The maximum takeoff and landing weights are 1610 kg and 1440 kg respectively.