So How Far Can Helicopters Fly?

As a general rule, helicopters usually fly around 2.5 to 5 hours before they have to stop and refuel. This translates to a distance of roughly 250 miles, which means that they can fly a lot farther than many people realize before they have to stop. However, this can vary depending on the type and size of the helicopter as well as many other aspects that you have to take into consideration.

Looking into how far helicopters fly without having to stop means first learning about the types of helicopters, the amount of extra weight being carried, and the size of the fuel tank.

All of these things can affect how long helicopters remain in the air before having to land to refuel. Many helicopters with no reserve are able to fly at 5000 feet for nearly 600 miles at a time.

Of course, there are also many types of helicopters, including commercial, private, and military ones, so in essence there is no hard-and-fast rule regarding the length of time or distance that a helicopter can fly without stopping.

Civilian helicopters, for example, usually have an average speed of 150 to 175 miles per hour while military helicopters can be even faster.

Today, the fastest military helicopter is the CH-47F Chinook, which can fly at 170 knots or roughly 195 miles per hour.

In the civilian world, the Airbus Helicopters’ H155 helicopter is the fastest and has a speed of approximately 200 miles per hour or 174 knots.

Overall, the absolute fastest chopper is the Eurocopter X3, which can fly at roughly 295 miles per hour or 255 knots.

How High Can A Helicopter Fly?

Most helicopters stick to the 5000-foot range, mainly because it is the perfect range when they’re looking for the flexibility to fly safely without the fear of crashing into something.

Some high-performance helicopters can fly up to 10,000 feet. If they make it to the 14,000-foot range — which some of them do — the passengers usually need an oxygen supply.

If you’re curious about the record for how far up a helicopter has been able to fly, that record was set by a man named Fred North in 2002 when he reached 42,000 feet with his AS 350 B2 Squirrel helicopter.

Some interesting statistics when it comes to determining how far helicopters fly include:

One of the reasons why different helicopters have different abilities to fly at various lengths and heights is because of their fuel tank sizes.

Obviously, the smaller tanks accommodate less fuel, which means that particular helicopter won’t be able to fly as far or as high.

The Sikorsky S92 helicopter, which is a larger model, is able to fly at 160 miles per hour for more than 600 miles.

Just as with airplanes, helicopters have to obey certain laws and rules set by governmental and aviation authorities. Rules can change from one situation to another and can be affected by factors such as:

In other words, helicopters are held to certain legal requirements and therefore cannot just take off and do whatever they like.

Because of this, how far helicopters fly is affected by the laws that chopper pilots must abide by when planning their trips.

Other Factors That Affect the Range Of A Helicopter

As you have undoubtedly already figured out, determining how far helicopters fly means realizing that the numbers are affected by things such as the payload and how much fuel you have in the tank.

Because in-air refueling is expensive and often complicated, most helicopter pilots come down frequently to refuel that way.

Two to five hours at a time seems to be the average that a helicopter can fly without refueling; again, these are average numbers.

In addition to the Sikorsky S92, the EC155 also has the possibility of flying for roughly 600 miles without stopping.

Choppers such as the Apache Attack helicopter are able to fly for around 1200 miles without stopping.

You have to realize that a lot of things come into play when it comes to how far or high a certain helicopter can fly. 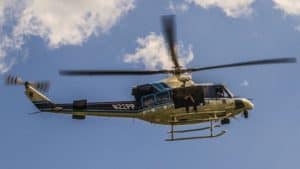 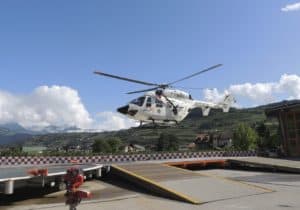 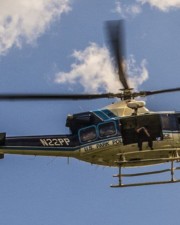 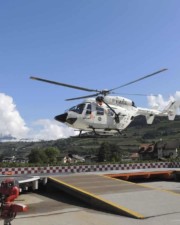