The Westland Scout is a light helicopter developed by Westland Helicopters. Developed from the Saro P.531, it served as an army-oriented general purpose military aircraft that shared many components with naval helicopters like the Wasp. It served in several conflict zones including Northern Ireland and the Falklands War where the British Army air corps operated this type extensively. 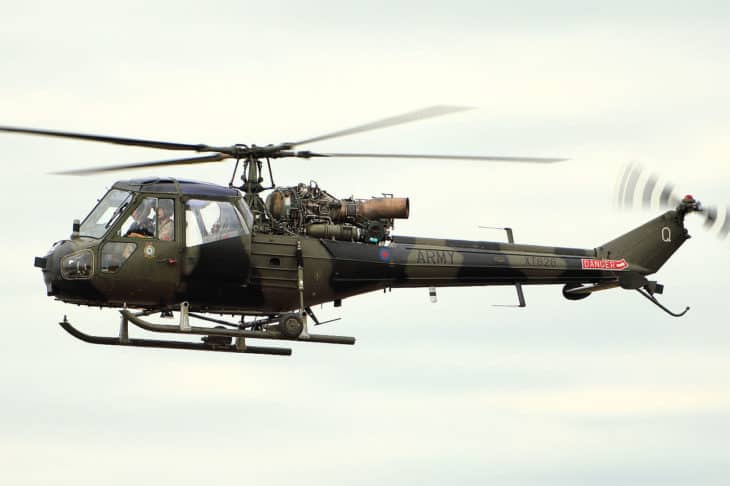 Westland Scout is a type of light helicopter that is highly designed for general military purposes. It was developed by the Westland Helicopters and was somewhat the same as the Westland Wasp helicopter for the navy since it shares several components from the latter.

Westland Scout was developed from P-531 Saunders-Roe. When it was acquired by the Saunders-Roe, it was the time that the Westland had taken over the project for P-531. Thus, it then became a prototype for Scout and Wasp. Theoretical design became extensive. There was also a practical test conducted in developing versions of Westland Scout.

The general design of Westland Scout was robust and perfectly manufactured. It has a fatigue life of 7,200 hours. Weapons and equipment were also evaluated, such as the rocket pods, ground-mapping radar, radar antenna, rotor heads, blades, and other parts.

Westland Scout served in the Army Air Corps from the 1960s to 1970s. There were times that Scout encountered engine problems which then delayed its production until 1963. Developing Scout was done to improve its stability and reliability. Westland Lynx then replaced Scout.

In Borneo, a Scout was missing in 1965. It was then found out that the Scout was hijacked by a prisoner who managed to get his escort’s firearm. Another tragedy was recorded when Scout crashed over the jungle where 5 crews were killed. Some Scouts were shut down in Aden and Radfan, which resulted to a forced landing. Usually, they were recovered and repaired and got into service.

In 1982, the Scout was featured in a Cinema film titled “Who Dares Wins.” This film shows the use of the British Army’s Special Air Service. Another Scout was featured on a beach location in 2008. This was produced by Royal Marine- the recruitment film. Another was filmed in Brunei featuring Malay artists on terrorism.