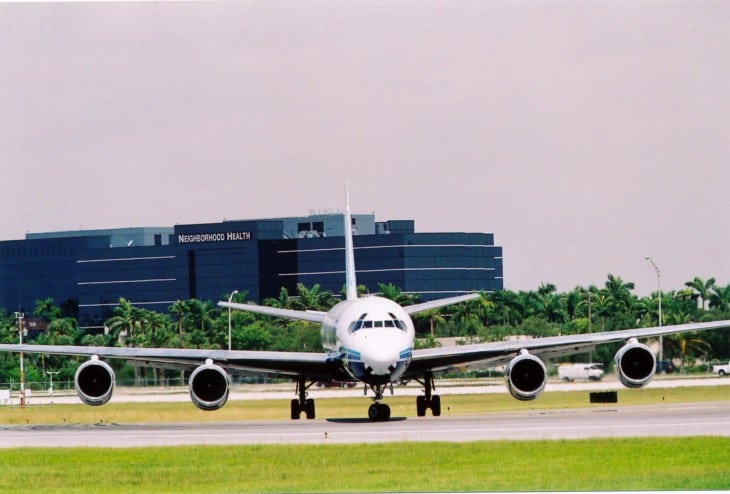 The Douglas DC-8 is a series of American airliners built by Douglas Aircraft Company from 1958 to 1967 and by McDonnell Douglas from 1967-1972. It is characterized by a four-engine setup and mid-to-long rate of narrow-body structure. The design of DC-8 series enabled it to have a larger cargo capacity, which became of its key advantages of competitors such as Boeing 707, Boeing 747 and Lockheed L-1011.

There were different variants of the DC-8. The variants meant differences in fuselage lengths, seating pattern, wings placement, choice of engines, fuel capacity and more. The variant of DC-8-71 and DC-8-73was updated version of the DC-8-60. They had a set of very powerful turbojet engines, allowing for a long range. The DC-8-71 payload capacity was slightly reduced compared to the DC-8-73.  The following are more details about the DC-8-71:

After the end of World War 2, Douglas Aircraft Company focused on commercial air travel. At first, Douglas focused on developing piston-engine based aircraft. IN 1952 Comet entered the airline industry but suffered a couple of fatal accidents. The industry learnt a lot from these accidents especially regarding cabin pressure. The Douglas DC-8 was developed with special emphasis on cabin pressure issues.

The Douglas DC-8 was first produced in the city of Santa Monica, California but after noise complaints from residents, the product and testing was moved to Long Beach Airport. Douglas DC-8-71 was developed on re-engineering the Douglas DC-8-61. After completing all the requirements and certifications, in 1981, FAA granted cortication for the DC-8-71 and it came into service. The first flights were from Atlanta to Savannah. Most of the Douglas DC-8-71 were conversions from previous models.

Rigours testing was done on the Douglas DC-8 series to determine the best design to maximize efficiency, cargo capacity and flight range. Several adjustments were made due to this testing. The Douglas DC-8-71 was designed with a low-wing sweeping backwards design. The wing was at the 30 degrees angle with two engines on each wing. The cabin diameter was 11 feet. This variation of the DC-8 was certified in 1982. There was great though given to the cabin pressure design after the metal fatigue of the Comet jet airliner.

The initial design for a DC-8 was to use four Pratt and Whitney JT3C turbojet engines. Eventually, for the Douglas DC-8-71, more fuel efficient, CFM56-2 turbofan engines by Grumman Aerospace were used. The turbofan engines were heavier which meant there had to be a reduction in maximum takeoff weights. The retrofitting of the engines which more fuel efficient variants meant the airplanes were better for commercial flying economics. There was also reduced noise with the new type of engines.

The Douglas DC-8 has a cruise speed of 885 km/h or 549 mph and is typically used for medium-to-long range flights. The payload capacity is 45000 kgs with a hold size of 3900 x 313 x 210 meters. The total load volume is 286 square meters. Initially, airliners were skeptical about jet technology and mostly turbofan engines were preferred. The pressure of competition has been the great enabler in the aviation industry. Advantages of the jet engine eventually won over the preference of turbofan engines.

There was an incident at the Douglas DC-8-71 in Philadelphia, USA in 2006. The crew of the airplane reported possible signs of fire on board. The warning systems confirmed that fire was in the main deck cargo. At the time of landing, black smoke started entering the flight deck and an emergency was declared. Upon stopping, an emergency evacuation was done. Despite the efforts, the airplane was destroyed beyond recovery. Later, it was determined that the fire came from containers that had some lithium batteries. This incident also highlighted a need for a better fire suppression system on board the airplane.