The McDonnell Douglas DC-9-20 was developed to meet the demand for enhanced short field capability by the use of more efficient engines and enhanced wings of the Series 30, in combination of the shorted fuselage from Series 10. It can fly up to 1,000 nautical miles carrying a maximum payload of 11,501 kg. 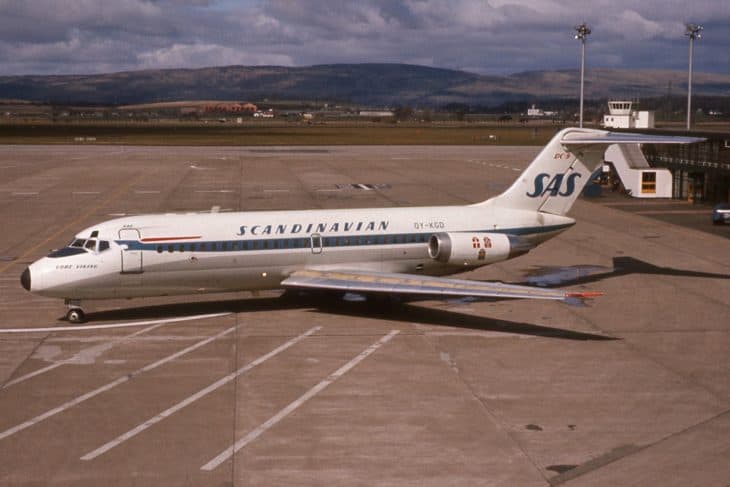 The DC-9-20 was developed in order to meet the demand of Scandinavian Airlines for an enhanced short-field variant of aircraft.

On September 18 1968, the Series 20 took its maiden flight. After two months, on November 25, the aircraft was awarded the Federal Aviation Administration type certification. On December 11 1968, the first aircraft was delivered to Scandinavian Airlines System (SAS).

On January 27 1969, it entered into service with Scandinavian Airlines System (SAS). Then on May 1 1969, the last delivery of the aircraft to SAS took place.

Also in 1969, a Head Up Display (HUD) supplied by Elliot Flight Automation was installed in a DC-9-20 at Long Beach and has been utilized for a three-month-trial period with pilots from several airlines, the FAA, and the United States Air Force.

The aircraft was intended to operate on short to medium routes, generally to small airports with short runways. There is also an attached air-stair for easy boarding and deplaning,

The DC-9—20 has a wingspan of 28.44 meters. Since the engines were mounted on the tail, it showed a smooth wing without engine pods that led to various benefits like longer flaps unhindered by engine pods on the leading edge, improvement in airflow during low speed and enabling a lower take off and approach speed.

The DC-9 Series 20 is powered by two JT8D-11 turbofan engines supplied by Pratt and Whitney. Each engine has a maximum thrust of 15,000 lbf.

The aircraft was initially certified with a maximum take off weight of 42,900 kg then later increased to 44,000 kg, which is eight percent extra compared to the previous series. It has a maximum landing weight of 43,200 kg and has a maximum zero fuel weight of 38,000 kg.

Particular range with maximum payload is 1,000 nautical miles, rising to 1,450 nautical miles if the aircraft will fly with its maximum fuel. It has a fuel tank capacity of 3,679 US Gal.

On January 30 1973, a Scandinavian Airlines flight 370 named as Reidar overran the runway of Oslo Fornebu Airport. The take off run was normal and the aircraft turned around at 125 knots. Suddenly the speed of the aircraft increased to 140 knots, that’s when the captain rejected take off, but it was not enough to stop the aircraft from moving. The thrust reverser did not deploy entirely that resulted to aircraft overrunning the runway. There were no recorded fatalities in the incident.