The DC-10-10 was the first version of the DC-10 series which was initially intended for the domestic market. It has a travel range of 3,500 nautical miles and equipped with three GE CF6-6D engines. 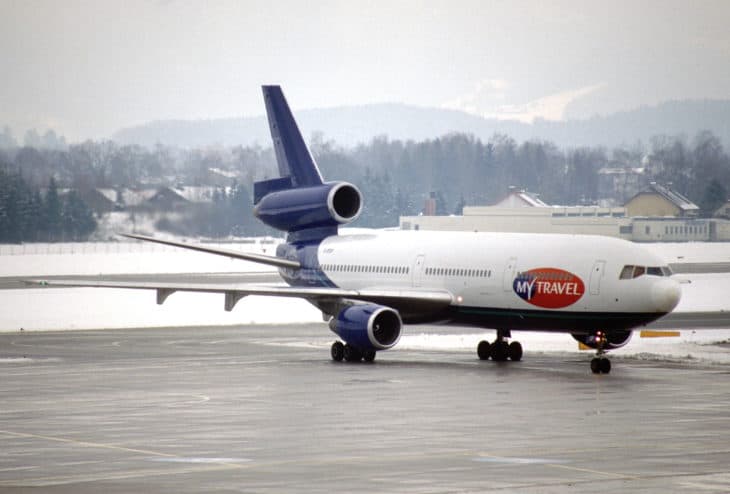 The McDonnell Douglas DC-10 is the first commercial airliner after the merging in 1967 of McDonnell Aircraft Corporation and Douglas Aircraft Company.

On July 29 1971, the DC-10-10 received its type certification from the Federal Aviation Administration. On August 5 of the same year, the aircraft was launched to the public by American Airlines.

In August 1983, McDonnell Douglas made an announcement that production of the aircraft would come to an end because of insufficient orders due to the 1979 plane crash that caused widespread fear to the public.

The DC-10-10CF is a convertible passenger/cargo transport type of the -10. Eight were produced for Continental Airlines, a United States airline based in Houston, Texas and one aircraft for United Airlines, an American airline based in Chicago, Illinois.

The DC-10-10 has an exterior length of 55.5 meters, tail height of 17.53 meters and a fuselage diameter of 6 meters. It has a low wing design with a wingspan of 47.35 meters and a wing area of 330 square meters. The aircraft has a retractable tricycle landing gear that produces less drag while on the initial stage of a take off run. It has a wheelbase of 22.07 meters.

Three turbofan engines power the Dc-10-10. Two of the engines were installed on pylons that connect to the base of the wings, then the other engine is enclosed in a secured banjo-shaped structure that is connected on the upper part of the rear fuselage.

The DC-10-10 is powered by the CF6-6 of the GE Aviation, an aircraft engine supplier headquartered in Ohio, United States. The engine is designed with a single-stage fan that has a single core booster stage, powered by a five-stage low pressure turbine. A sixteen-stage high pressure axial compressor that continuously pressurizes gas is powered by a two-stage high pressure turbine. It has a circular combustor and a fan diameter of 2.19 meters that produces an airflow of 590 kilograms per second. It has a maximum thrust of 40,000 lbf.

On November 3 1973, a National Airlines flight 27 from Miami International Airport suffered an uncontained failure on the number three right engine. 24 people on board were injured and one person died among the 128 occupants of the flight.

On March 1 1987, a Continental Airlines flight 603 from Los Angeles International Airport crashed during a rejected takeoff. 4 people died and 29 were injured on the accident.

On May 25 1979, an American Airlines flight 191 from O’Hare International Airport crashed after the engine number one and its pylon assembly detached from the left wing, pulling away a 1 meter portion of the leading edge with it. There were 271 occupants on board and none of them survived the accident.

On October 31 1979, a Western Airlines flight 2605 known as the “Night Owl” from Los Angeles International Airport crashed after it landed on a closed runway at Mexico City International Airport. Seventy-two people on board and one person on the ground were killed on the accident. This flight is considered as the deadliest aviation accident in Mexico City.