This aircraft is one of its kinds due to its unique features. Although its production ceased in 1972, it is still in use in the aviation industry. It is difficult to forget such a masterpiece completely. Due to its features, it has been put to different uses. 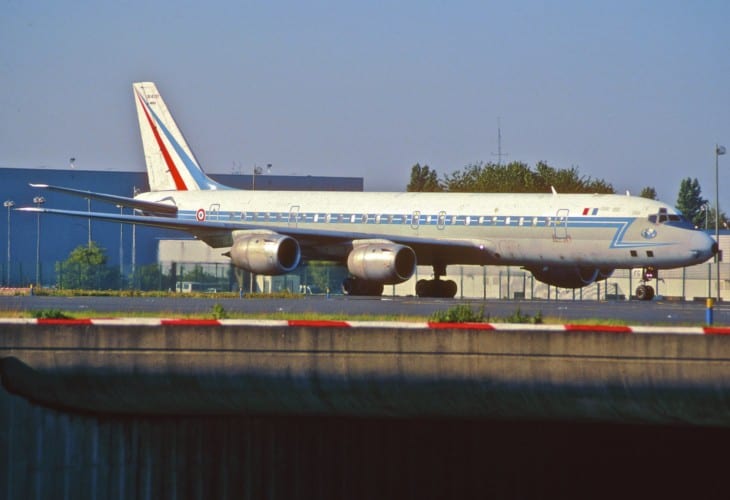 Having manufactured DC-2 to DC-7 series of aircraft before 1952, McDonnell Douglas had become one of the most successful aircraft manufacturers. However, the company wasn’t interested in manufacturing jets before 1952. But by the end of 1952, the company had started mulling the idea of producing a jet. The idea received a nod and they hit the ground running with the design of their first jet.

The DC-8 series became the first jet series from the manufacturer. Its first DC-8 jet had 80 seats, four engines, and a cabin diameter of 11 feet. Also, it had a maximum weight of 190,000 lb. The range was estimated to be about 3,000 to 4,000 miles. It is needless to remind you that there have been countless modifications after that.

This is a narrow-body plane, designed as a competitor for Boeing 707. And indeed, it gave Boeing a good run for their money. With its four engines, this air machine does a maximum speed of 932km/h. A length of 157 feet and 5 inches makes it clear that it was designed for commercial use.

This particular aircraft can take a total of 192 people. It is designed for a cabin crew of only 3 people and it can take a maximum number of 189 passengers. However, subsequent variants of the plane can take more passengers because they are more spacious.

One of the reasons why this super machine is still in use despite being out of production is its outstanding performance. It offers a normal cruise of 479 kts and an economy cruise of 459 kts. Its landing distance is 6500 feet, while its balanced field length is 10,000 feet.

One feature that is responsible for its impressive performance is the availability of four 56-2 C6 engines. It is believed that even if one of the engines is not fully operational, this plane will still perform satisfactorily.

Although it was designed for other applications, it has been modified several times to support NASA’s airborne science missions. The jet transport was manufactured in 1969, but it was acquired by NASA in 1985. One feature that must have attracted NASA is its ability to fly at altitudes from 1,000 feet to 42,000 feet for up to 12 straight hours.

That’s probably because most NASA missions span about six to ten hours. In addition to that, this aircraft can carry up to 30,000 pounds of scientific equipment and instruments, while still having enough room for up to 45 people, with flight crew included. Its suite of sensors and data systems can be tailored towards specific missions. This means that the aircraft is flexible.

Currently, apart from the one being used by NASA, many DC-8 planes are being put to private use. In addition to that, it is still in commercial service. Skybus Cargo Charters has three of them, the Peru-based CFS Air Cargo is currently making use of one, and Trans Air Cargo also has three in its fleet of aircraft. Finally, the Disaster Relief Organization is currently operating one DC-8.