Designed to increase the capacity of the C-5 Galaxy to carry on until 2040, the C-5M Super Galaxy is a military aircraft in service of the United States Air Force. It is an improved version outfitted with new engines and enhanced avionics and one of the largest military transport aircraft in the world. 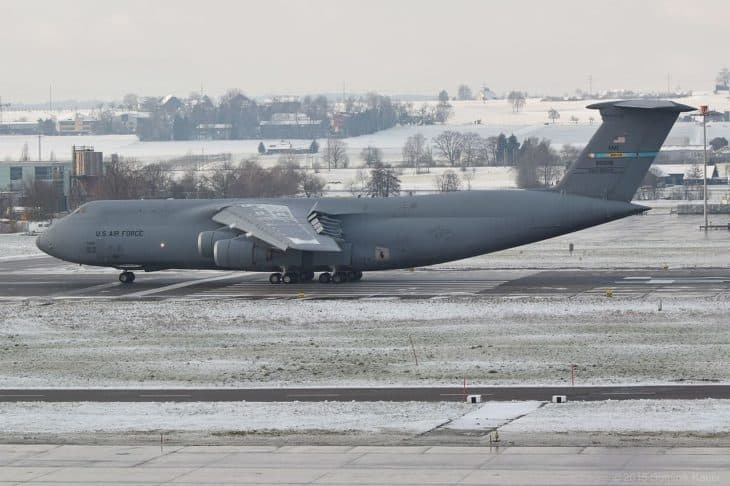 In 1998, the C-5 Avionics Modernization Program (AMP) started with a $454 million contract. This program was set to modernized the cockpit of the C-5 aircraft including avionics upgrade to Global Air Traffic Management compliance, upgrading communication system, newly installed flat panel displays, enhancing navigation and safety, and having an improved autopilot system.

In December 2002, the first upgraded aircraft under the Avionics Modernization Program took its maiden flight. In October 2004, the aircraft was delivered to the United States Air Force.

In May 2006, the upgraded aircraft was designated as the C-5M Super Galaxy.

In March 2007, the third C-5M test aircraft, which is an upgraded C-5A took its maiden flight.

The C-5M Super Galaxy combines more than seventy improvements and reduced operating cost. It boasts reliability enhancements and efficiency in performance. It has an exterior length of 75.5 meters, around 3 meters longer than an Airbus A380 superjumbo aircraft. It has a height of 19.84 meters.

The aircraft has a wingspan of 67.89 meters and a wing area of 580 square meters. It is also fitted with five sets of landing gears and twenty-eight wheels. The C-5M Super Galaxy would not fit in most of the hangars because of its size. In few cases, in order for the aircraft to fit inside, the Air Force will have to make a hole in the sliding doors for the tail to stick out.

The aircraft has a huge interior. It has a cargo hold of 36.8 meters in length, 5.8 meters in height and 4.1 meters in width. The C-5M can transport outsized cargo over intercontinental flights and able to take off and land on approximately short runways. The nose and the aft doors are both open, letting the ground crew to load and off-load cargo at the same time from both ends, which resulted to reduced cargo transfer times.

The General Electric CF6-80C2 high-bypass turbofan engines give power to the C-5M Super Galaxy. The aircraft has four engines which produce a twenty-two percent more thrust or 51,000 lbf each. It has a fan diameter of 2.36 meters and an airflow of 1,750 pounds per second. It has a pressure ratio of 30.4 and a bypass ratio of 5.15.