The Lockheed L-188 Electra is a four-engine, turboprop airliner manufactured by Lockheed Corporation. It is smaller, quieter, faster, and more economical to operate than the then current four-engine aircraft. The Electra is capable to take off fully loaded and make multiple flights without the need to refuel. 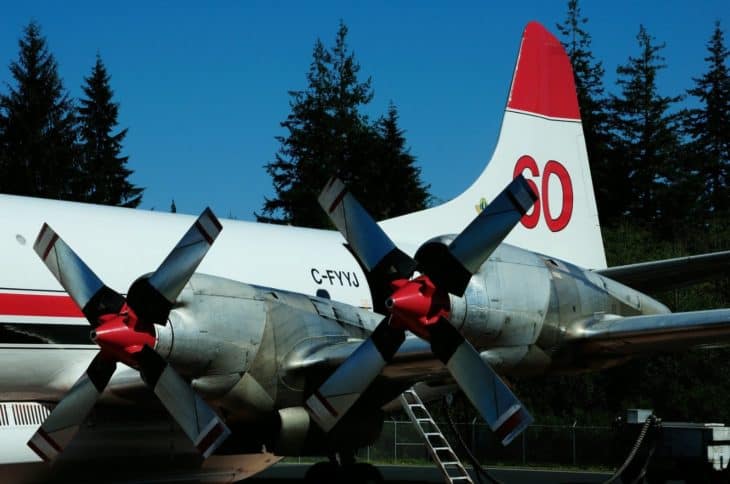 In 1954, the L-188 Electra was developed to meet the need of American Airlines for a domestic aircraft with a short to medium range that can transport from 75 to 100 passengers. In June 1955, the airline placed an order of 35 aircraft.

On December 6 1957, the first prototype of L-188 Electra took its maiden flight from Lockheed Air Terminal in Burbank, California. It was a low wing aircraft with conventional setting, retractable tricycle type landing gear, and powered by four turboprop engines.

On October 8 1958, the aircraft was first delivered to Eastern Air Lines with Manufacturer Serial Number 1007, then on January 12 1959, it entered into service.

The L-188 Electra has a short and low wing with a wingspan of 30.18 meters and wing area of 120 square meters that resulted in the majority of the wingspan being covered in spiral slipstream. It has big fowler flaps that remarkably increased the effective wing area while being extended.

The aircraft has an external length of 31.85 meters, tail height of 10.01 meters and fuselage diameter of 3.2 meters.

Even though the landing gear is hydraulically operated, it has a safety feature the permits free fall extension of the gears without the need to use hydraulic or electrical power. The nose gear and the main gear retract ahead towards the aircraft’s nose. The aircraft has a wheelbase of 11.27 meters.

Huge cargo compartments were positioned in the aircraft’s belly; the carry-on baggage space was in the cabin on each side of the aisle.

During the later years of the aircraft, several L-188 Electra were converted to all cargo aircraft or combination passenger-cargo transport.

The L-188 Electra is powered by four Allison 501-D13 turboprop engines. The engines compose of a gas turbine power section, torque meter assembly, and a reduction gear assembly. It has a maximum thrust of 3,750 shaft horsepower each.

The aircraft was designed for short take off and landing distances, to drive out of 5,000 runways and has the speed range for maximum adaptability in the pattern of air traffic. Landing rolls of lower than 300 meters were displayed without using the reverse thrust.

The L-188 Electra was initially equipped with speed brakes to provide appropriate descent control characteristics, however flight test work showed that the speed brakes were unessential with the high drag available from the propellers.

On February 3 1959, an American Airlines flight 320 from Midway International Airport crashed into the East River in New York during an attempt to have an instrument approach at La Guardia Airport. Among seventy-three people on board, sixty-five people died in the accident and it has been recorded as the first crash of the L-188 Electra.

On March 17 1960, a Northwest Orient flight 710 from Chicago Midway Airport to Miami International Airport crashed out of control. The said aircraft disintegrated in-flight and broke into two pieces; the right wing fell in one piece and the other half descended close to Cannelton, Indiana. There were fifty-seven passengers and six crew on board; none of them survived the accident.