The Lockheed L-1049 Super Constellation is designed and produced by Lockheed Corporation from 1951 to 1958. It was developed from L-049 and first flew on July 14, 1941. A total of 259 commercial and 320 military L-1049 were built. The L-1049 was retired from commercial service and preserved examples exist as private aircraft. 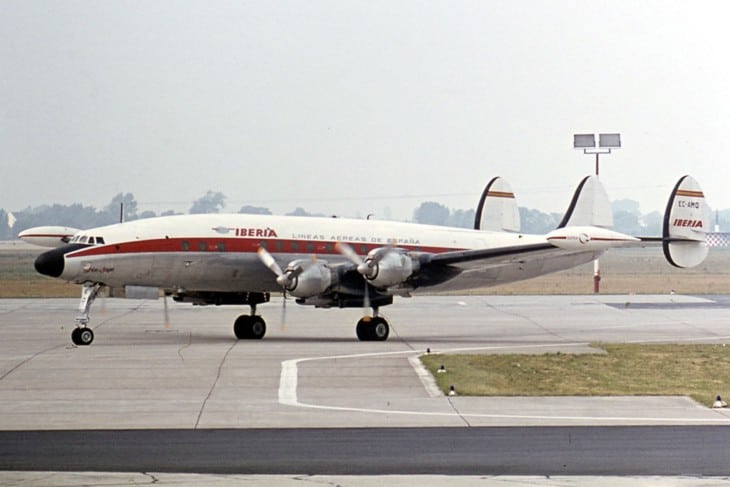 During early 1943, the aerospace company Lockheed Corporation began to develop stretched versions of the Constellation series. The first stretched version was the L-049 followed by the L-749. After the Douglas Company introduced the DC-6 rival aircraft, Lockheed developed the L-1049 as a response.

On July 14, 1951, the initial production version L-1049 took its first flight. In November of the same year, the aircraft was awarded its type certification. In December 1951, it entered service with Eastern Airlines. In 1952, Trans World Airlines started to operate the aircraft, and beginning in 1955, L-1049Gs started in service flying transatlantic routes.

The L-1049C version can accommodate forty-seven to one hundred and six passengers. It has five crew members including a pilot, copilot, navigator, engineer, and radio operator. The aircraft has an exterior length of 34.62 meters, an exterior height of 5.7 meters, and a fuselage width of 3.7 meters. It has a tail height of 7.54 meters. The wheelbase is 8.2 meters while the wingspan and the wing area is 37 meters and 153 square meters, respectively. It has an empty weight of 31,298 kg, a maximum takeoff weight of 54,431 kg, a maximum landing weight of 46,031 kg, and a maximum payload of 16,000 kg.

The aircraft is powered by four Wright R-3350 972-TC-18DA-1 Duplex-Cyclone twin-row supercharged air-cooled radial engine with eighteen cylinders displacing nearly 55 L. Each engine is rated at 3,250 horsepower thrust and drives a three-bladed constant-speed feathering propeller. The L-1049C has a maximum speed of 290 knots and a cruise speed of 264 knots. It has a travel range of 4,480 nautical miles and can fly up to 25,700 feet. The rate of climb is 1,100 feet per minute. It has a takeoff and landing distance of 1,400 meters.