The Lockheed C-141 Starlifter is a military strategic airlifter designed for long-range routes and for carrying large quantities of cargo or passengers. 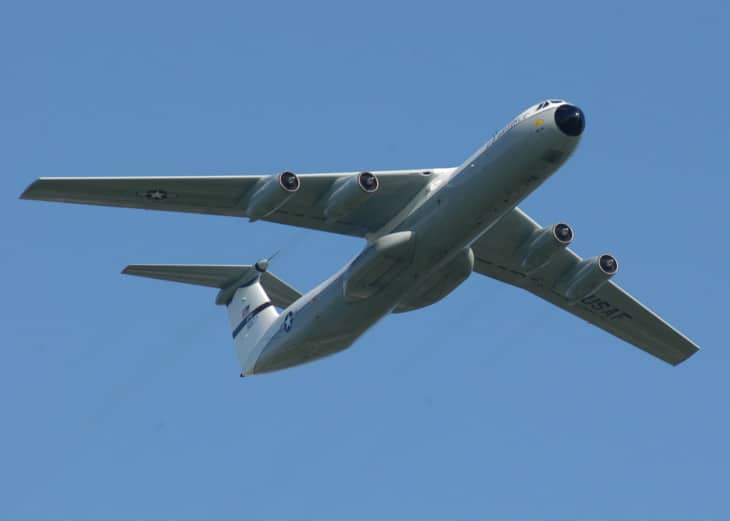 The Lockheed C-141 Starlifter is a strategic airlifter designed for long-range routes and for carrying large quantities of cargo or passengers. It is powered by four Pratt and Whitney TF33 turbofan engines with a maximum thrust of 21,000 lbf each, mounted in pods below the high-mounted swept wings. It has a retractable undercarriage, with a twin-wheel nose unit and four-wheel main units. The wheelbase is 20 meters. The high-mounted wing has a wingspan of 48.8 meters and a wing area of 300 square meters and allowed internal clearance in the 3-meter wide cargo compartment. Correspondingly, the aircraft can carry, for instance, an entire LGM-30 Minuteman intercontinental ballistic missile (ICBM) inside its container; it can carry a maximum of 32,136 kg on short routes, and up to 42,000 kg when properly configured to carry the Minuteman, which lacked other equipment. The Starlifter was capable of carrying a maximum of 154 fully-geared troops, 123 paratroops, or 80 litter patients in flight. It was found out that under particular conditions, the cargo deck would run out of volume before the maximum weight value could be attained.

In the matter of ground logistics, an essential feature of the C-141 Starlifter was the floor height of the cabin. It was just 1.3 meters above the ground, allowing uncomplicated entry to the cabin through the large rear doors integrated into the upward-sweeping rear fuselage. This portion is equipped with a large one-piece hydraulically-operated loading ramp for easy loading and unloading of both vehicles and general cargo. The two rear doors were configured to allow the aircraft to be used for dropping paratroops. The aircraft has an external length of 51.3 meters, a height of 12.07 meters, and a fuselage diameter of 4.5 meters.