Manufactured by Raytheon Technologies and Hawker Beechcraft Corporation, the Raytheon T-1 Jayhawk is a trainer aircraft of the United States Air Force. The aircraft is a military version of the Hawker 400A that is utilized for advanced navigator training that can be operated in high and low altitude training missions. 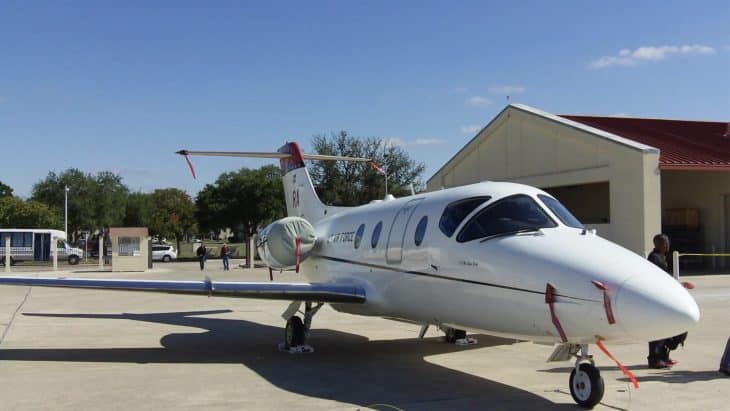 The twin-jet aircraft has been used in the progressive stage of Air Force Joint Specialized Undergraduate Pilot Training for chosen students to fly a strategic or tactical airlift or a tanker plane. It is also in service with the United States Air Force Combat System Officers, and as a substitute of the T-39 Sabreliner in the intermediate stage of United States Navy or United States Marine Corps student training for naval flight officer.

In January 1992, the first aircraft was acquired by the US Air Force and dispatched to Reese Air Force base in Texas. In 1993, student training has started.

On December 15 2005, one of the military variant T-1A finished one million flight hours with the government of United States.

Initially designed to meet the demands of the United States Air Force and the Japan Air Self Defense Force, the T-1 Jayhawk is intended for training pilots in flying an airlift or a tanker plane. The aircraft is capable of resisting Low Level Turbulence (LLT) and dangerous bird strikes even when it is flying in a low level environment. It is capable of providing air support for a bare minimum of eighteen thousand flight hours.

The aircraft has a cockpit seating for three crew; pilot, co-pilot or instructor and observer. It can also be configured with four optional seats for an additional crew member. Cockpit seats were outfitted with a five-point harness. The T-1 Jayhawk is equipped with a life raft, life vests, anti-exposure suits, crash axe, fire extinguishers and first aid kits for emergency purposes.

The aircraft is also equipped with a Distance Measuring Equipment (DME) that provides a constant slant range distance from station output by calculating time lapse of a signal being communicated by the aircraft to the station. It is also fitted with a Ground Proximity Warning System (GPWS) for warning the pilot during sudden danger, a Tactical Air Navigation System (TACAN), a Traffic Collision Avoidance System (TCAS) to minimize mid-air collision incidents between aircraft, a Radar Altimeter (RA) for measuring altitude, Weather Radar Systems and a Global Positioning System (GPS).

Two JT15D-5B turbofan engines from Pratt and Whitney powers the T-1 Jayhawk. Each engine has a maximum thrust of 2,900 lbf. The engine is unique among present-day turbofans because of a centrifugal compressor that acts as its main high-pressure system.