The R6V Constitution was developed by Lockheed in the 1940s. It was a large, propeller-driven, long-range, double-decker high-capacity transport and airliner for the United States Navy and Pan American Airways. Two aircraft were produced and both were prototypes, although they were in service with the Navy. 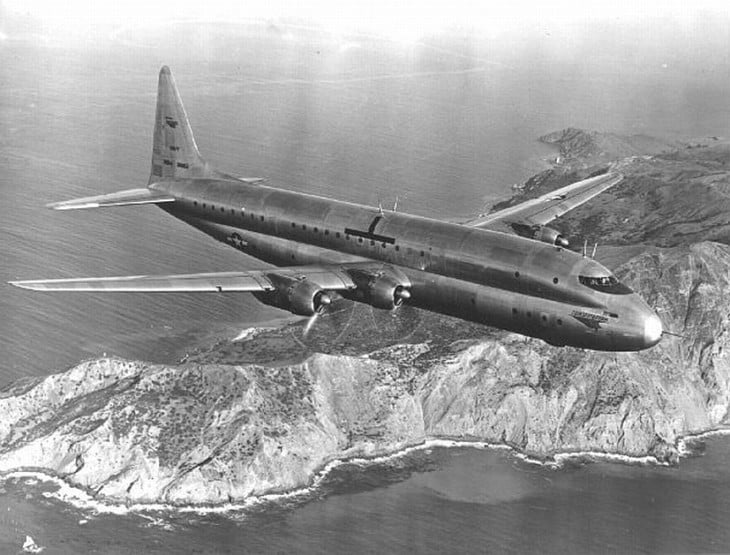 In 1942, the Lockheed Constitution started as a joint development by the United States Navy, Pan American Airways, and Lockheed. The design requirements, originally labeled Model 89, was a big transport aircraft to enhance upon the Navy’s fleet of fixed-wing seaplanes known as flying boats. The transport could bear 7,900 kg of cargo, over 4,000 nautical miles at 25,000 feet cruising altitude, and a maximum speed over 216 knots. It would be entirely pressurized and adequately big so that the majority of primary components could be obtained and likely repaired in flight.

In the first quarter of 1946, the first Constitution, BuNo 85163 was built. On November 9, 1946, the R60 conducted its maiden flight to Muroc Air Force base and went through an exhaustively recorded test program. The aircraft is equipped with interim 3,000 horsepower R-4360-18 radial engines. On July 25, 1948, the BuNo 85163 flew nonstop from Moffett Federal Air Field, California to Naval Air Station Patuxent River, Maryland.

The initial flight testing showed that the first Constitution was lacking power so the engines were upgraded to a R-4360-22-W engine rated at 3,500 horsepower. On February 2, 1949, Ship No. 1 was acquired by Navy Transport Squadron 44 (VR-44) at Naval Air Station Alameda in California.

On June 9, 1948, the second aircraft, BuNo 85164 took to the skies for the first time and reached 25,000 feet in the course of a two-hour flight. Compared with Ship No. 1, the upper deck was entirely configured as a luxury passenger transport and could carry 92 passengers and 12 crew.

The lower deck could also be configured to accommodate an additional 76 passengers and had a 208.8 cubic meter of cargo space. On February 3, 1949, it made a nonstop transcontinental flight from NAS Moffett Field to Ronal Reagan Washington National Airport in Virginia with seventy-four press members. In 1949, it conducted a Navy recruiting tour of nineteen cities.