The Bell 47 is a multipurpose light helicopter built by Bell Helicopter. It was derived from the Bell 30 prototype and was designed with a single rotor and a single Lycoming engine. The Bell 47 was the first helicopter that has been certified to be used for civilian transport. 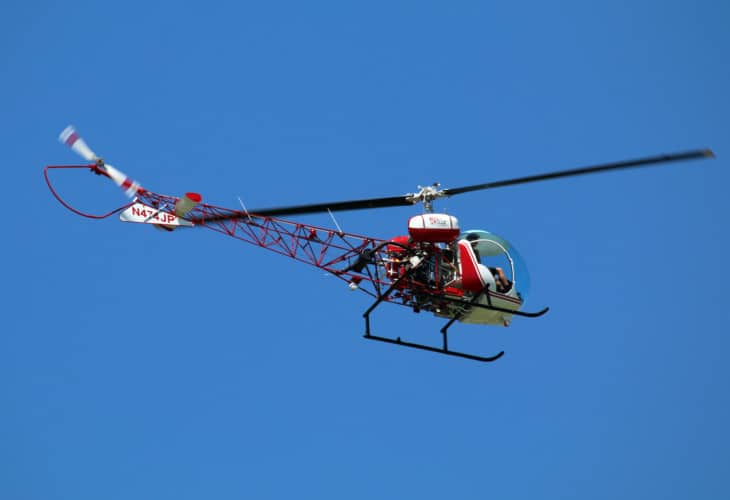 Blog posts that mention the Bell 47:

On July 3, 1958, Telecopter, a Bell Model 47 went into operation and set a record as the world’s first television news helicopter with KTLA chief engineer onboard, John F. Silva. The Telecopter was fitted with a television camera and was leased to the television station KTLA virtual channel 5 in Los Angeles, California.

The Bell 47 had also been in service with the National Aeronautics and Space Administration (NASA) on the project Apollo. The helicopters were operated by astronauts as trainers for the Apollo Lunar Module.

On May 13, 1949, an altitude record of 18,500 feet was achieved by a Bell 47. On September 21, 1950, it set a record for being the first helicopter flying over the highest and most extensive mountain range in Europe, the Alps. On September 17, 1952, a world distance record for the helicopter was set when Capt. Elton J. Smith flew nonstop from Hurst, Texas to Buffalo, New York in a 1,057 nautical mile range.

The Bell 47 has an external length of 9.6 meters, a height of 2.8 meters, and a width of 1.5 meters. The main rotor diameter is 11.33 meters and the main rotor area is 100.8 square meters. The helicopter is powered by a single Lycoming TVO-435-F1A engine. It is a six-cylinder, horizontally opposed gasoline piston engine with overhead valve, Marvel-Schebler carburetor, pressure pump oil system, air-cooled by fan cooling system, and a direct drive reduction gear. It has a maximum thrust of 280 horsepower.

The helicopter has a maximum speed of 91 knots and a cruise speed of 73 knots. The travel range is 214 nautical miles, the service ceiling is 11,000 feet, and the rate of climb is 860 feet per minute.