The Bell 407 is perhaps one of the most reliable single-engine helicopters on the market. Passengers and transport cargo over long distances, most especially to higher altitudes. The 407 can be armed with a box, which is able to carry six pairs of skis or six golf bags. 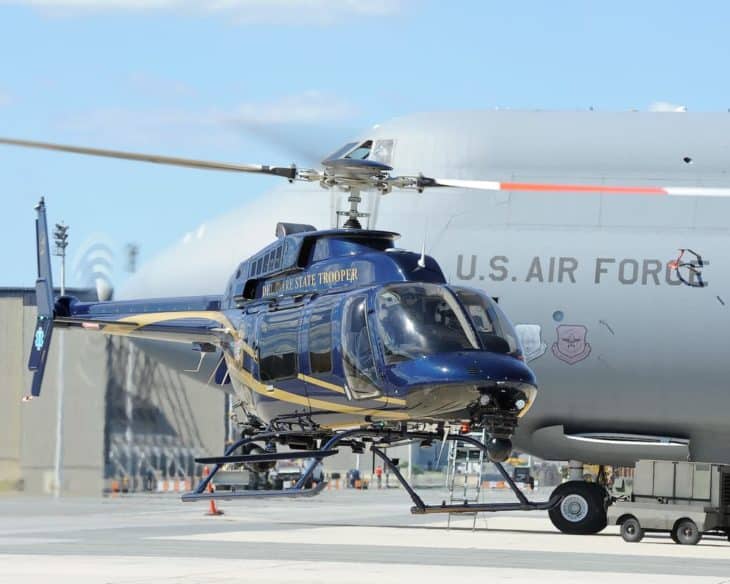 Blog posts that mention the Bell 407:

The Bell 407 is a 4-blade, single-engine civil utility aircraft derived from the Bell 206L-4 LongRanger. This aircraft makes use of the 4-blade, soft in-plane style rotor with composite huge made for the US Army’s OH-58D Kiowa Warrior rather than the dual-blade, semi-rigid, as well as a teetering rotor of the Bell 206L-4.

In the year 1993m Bell company started the design of the New Light Aircraft as a substitute for its Bell 206 series. This program led to the Bell 407, Bells’ LongRanger development. A 206-3 LongRanger was adapted to serve as the demonstrator of the 407. The demonstrator utilized hardware for Bell 407 and put in molded fairings to embody the wider fuselage of the 407 then under expansion.

The demonstrator was first flown on the 21st of April, 1994, and the 407 programs were announced publicly in Las Vegas at the Heli-Export in 1995 January. The first prototype achieved its first flight on the 29th of June, 1995, and the flooring prototype followed on the 13th of July, 1995. After a brief development program, the initial production of 407 flew on the 10th of November 1995.

The Bell 407 was permitted on the 9th of February, 1996 by Transport Canada, with the FAA following after on the 23rd of February. The full production started in the year 1996 at the company’s plant in Mirabel, Quebec, and in the year 1997, the company produced 140 airframes to fill the first orders.

Precise Flight Pulselite: This lessens bird strikes and improves the external visibility of the helicopter while flying. As a standard feature in every Bell 407 and an aftermath offering, the technology alternately pulses landing as well as taxi lights to signal the presence of the helicopter to other air traffic as well as drive away birds.

IFR Capable: This can navigate the skies as well as complete vital missions in spite of low cloud ceilings—an accessible solution to getting the helicopter in cloudy weather to where it is required.

High-Tech Display:  See vital information as it is coming in. Due to the high resolution LED display, clarity, and readability is not an issue even in a direct sunlight. Faster and newer processors enable for fast, responsive detail to prepare the pilot for each case.

Custom Cabin Space: Fast entry, fast-loading as well, as seating for six passengers. It has a wide cabin door and over 100 cubic feet of flexible passenger space. This allows passengers to move comfortably.

Powerful: Made for power, prepared for anything, this comes with a dual-channel FADEC engine and automatic light features; take full comfort as you have the most excellent tools to go to your destination.