The TH-57 Sea Ranger is a military version of Bell 206, a two-bladed multipurpose utility helicopter. This training helicopter is intended for the United States Navy and the United States Marine Corps, and also being used for photo, chase, and utility missions. 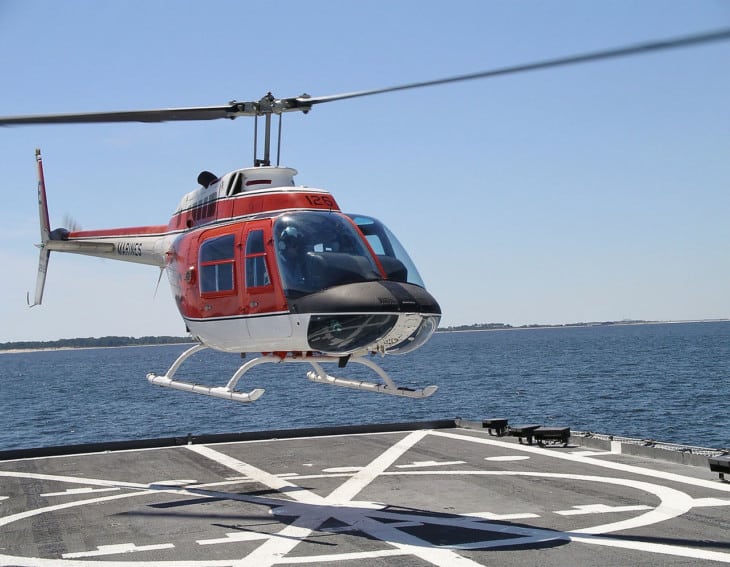 In 1966, the United States Navy and the United States Marine Corps had a requirement for a new training helicopter that will take over the Bell TH-3L and TH-12M Sea Sioux that were still used in training schools. These two then helicopters were also in the process of being obsolete. A call for tenders has been made, and Sud-Aviation and Bell Helicopters responded.

Sud-Aviation offered the Aerospatiale Gazelle SA 340, however during that time, there was only one prototype of this kind and it had not made its first flight yet. The Bell Helicopters offered the 206 Ranger that made it won over its rival. Forty specimens were ordered, and it was officially designated as the TH-57 Sea Ranger.

The TH-57 Sea Ranger has proven to be an extraordinary trainer aircraft, steady but hypersensitive to control inputs, specifically rudder. Student Naval Aviators find it hard in the beginning to steadily operate the aircraft, running through large white box outlines drawn on the surface of the ground. The usual tendency is to control too much at first, however, students eventually hover smoothly and easily, showing very clear control of the aircraft, composed and capable of multitasking. The TH-57 Sea Ranger better equips student Naval Aviators for huge and weighty aircraft.

The TH-57 is a land-based, skid-constructed, utility type helicopter equipped to take off and land from fairly level terrain. The TH-57 Sea Ranger has a fuselage length of 11.82meters, height of 2.91 meters, and rotor diameter of 10.16 meters.

The vertical stabilizer is semimonocoque-constructed. It is built of aluminum honeycomb and aluminum skin that gives directional stability on the rotorcraft and decreased tail rotor loads.

The helicopter cabin is mainly built of aluminum honeycomb protected with fiberglass or aluminum skin. This kind of construction gives a high-quality weight to strength ratio and also supports the cabin to insulate against noise.

The design of the skid-type landing gear composed of a pair of aluminum alloy curved cross tubes located to the base of the forward segment by four strap assemblies, skid tubes were also made of aluminum with a forward part arched to the top for sliding landings, and a formed steel tail skid attached to the bottom part of the vertical fin and covers the tail skid from ground contact because of a tail lowlanding. Additionally, the tail skid is arched to the top to avoid embedding in the ground while in a rearward flight.

The TH-57 Sea Ranger is powered by Allison 250-C20BJ turboshaft engine. The engine components compose of a 6-stage axial and 1-stage centrifugal compressors, a single can combustion chamber, a 2-stage axial gas generator power turbine and a 2-stage axial free-power output turbine. The turboshaft engine has a maximum thrust rate of 420 shaft horsepower. The engine gives power to the main rotor that is used for lift and thrust, and the tail rotor that is used to counterbalance torque and give yaw control.