The Bell 230 is an improved derivative of the twin-engine light helicopter Bell 222. It is a utility transport version introduced in 1991 powered by two Allison 250 turboshaft engines. 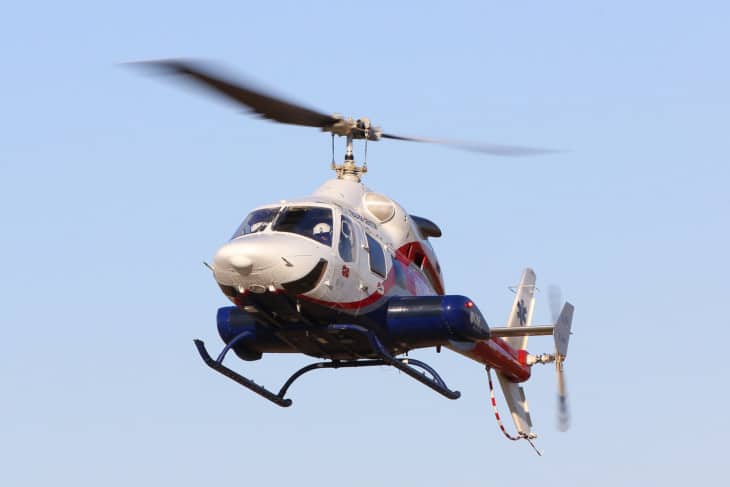 The Bell 230 is a development of the Bell 222 with newer twin Allison 250 engines and other minor modifications. On August 12, 1991, the prototype 230 took to the skies for the first time. In March 1992, the helicopter received its certification from Transport Canada. November in the same year, delivery of the first production helicopter commenced. In 1995, the production of the Bell 230 ended with a total of thirty-eight helicopters built.

The Bell 230 design incorporates two main rotor blades made of stainless steel fiberglass and elastomeric bearings on the rotor hub that acts as a hinge to flapping, lagging, and pitching motion of the rotor blade.

The helicopter can accommodate up to a maximum of ten persons in flight. Seating layout is available in a standard configuration for seven passengers and a single pilot, or executive configuration of up to six passengers with one to two pilots. The Bell 230 is normally flown with a single pilot and can be designed as a corporate or executive version, emergency medical services helicopter, or as a utility transport helicopter.

The helicopter is powered by a twin Allison Model 250 engines. Now known as the Rolls-Royce M250, it is a turboshaft engine with 6-stage axial and 1-stage centrifugal compressors, single can combustor chamber, and 2-stage axial gas generator power turbine and 2-stage axial free-power output turbine. The engine exhaust stacks are positioned on the upper part of the cowling. Fuel is deposited in three tanks located in the fuselage and sponsons.