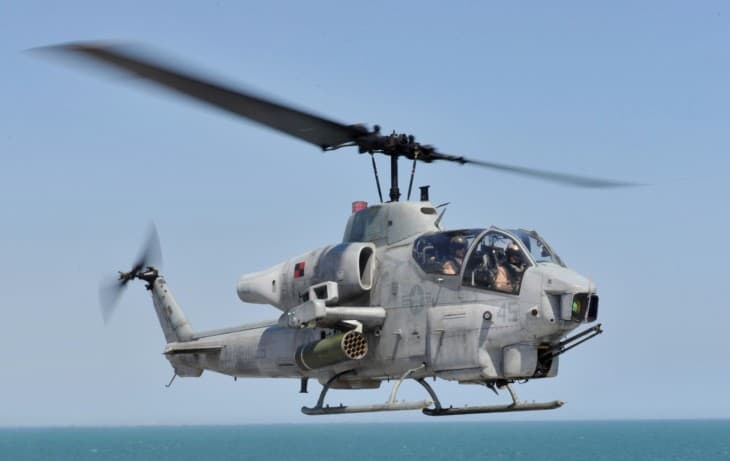 During the mid-1960s, the AH-1 Cobra began to develop as a temporary gunship helicopter for the United States Army to be used in the Second Indochina War. In June 1967, the delivery of the first AH-1G HueyCobras took place.

From 1967 to 1973, the manufacturing company Bell Helicopter built 1,116 AH-1G helicopters intended for the United States Army. The helicopter completed more than a million operating hours in Vietnam. The AH-1G Cobra gained interest from the United States Marine Corps, however, the USMC favored a twin-engine helicopter for enhanced security and protection in operations over waters, and as well as a more powerful weapon mounted in the turret.

Initially, the Department of Defense hesitantly provided the twin-engine variant of the helicopter to the USMC in the notion that similarity with AH-1G helicopters of the Army exceeded the edge of a dissimilar engine configuration. But in May 1968, the USMC succeeded and signed a contract with Bell Helicopters to produce forty-nine AH-1J SeaCobras equipped with twin-engines. In 1969, the United States Army deployed thirty-eight AH-1Gs to the United States Marine Corps.

The twin-engine helicopter is powered by General Electric T700-GE-401 turboshaft engines which produces a maximum thrust of 1,690 horsepower. The helicopter has a maximum cruise speed of 190 knots and a travel range of 317 nautical miles. It can fly up to 15,000 feet and can climb up to a rate of 1,614 feet per minute. The maximum takeoff and landing weights are both 6,690 kg, and the maximum payload is 2,065 kg. The fuel capacity is 460 gallons.