The Grumman A-6 Intruder was built and produced by Grumman Aerospace as an all-weather attack aircraft powered by twin jet engines developed in the late 1950s to early 1960s. In April 1960, the aircraft performed its maiden flight and was introduced in 1963. The A-6 Intruder was in service with the United States Navy as well as the United States Marine Corps and was retired in February 1997 and April 1993, respectively. 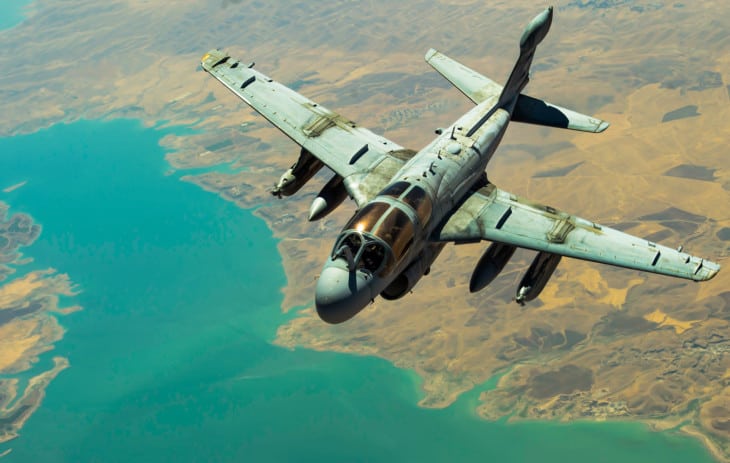 Blog posts that mention the Grumman A-6 Intruder:

From the late 1950s until the early 1960s, Grumman Aerospace began to develop the A-6 as a response to the need of the United States Navy for an all-weather carrier-based attack aircraft powered by jet engines. It was built to succeed many medium-sized attack aircraft during the time, including the Douglas A-1 Skyraider single-seat attack aircraft. On April 19, 1960, the aircraft prototype took to the sky for the first time.

In comparison to its antecedent and other attack aircraft of its kind, the A-6 Intruder featured an interconnected avionics system. It can accommodate two crew members; a pilot and a weapons officer seating in a tandem configuration. It has an external length of 16.69 meters, an external height of 3.3 meters, and a fuselage diameter of 1.9 meters. The wheelbase is 6 meters and the tail height is 4.75 meters. It has a wingspan of 16.15 meters and a wing area of 49.14 square meters. The empty weight is 12,093 kg, the maximum payload is 8,840 kg, and the fuel tank capacity is 2,385 US gal. It has a maximum takeoff weight of 27,397 kg on short-based operations.

The aircraft is powered by twin Pratt and Whitney J52-P8B turbojet engines. It produces a maximum takeoff thrust of 9,300 lbf each. The maximum speed is 650 knots at sea level. It has a cruise speed of 412 knots, a stall speed of 98 knots flaps down, and a never exceed speed of 700 knots. The combat range is 878 nautical miles with maximum payload and the ferry range is 2,818 nautical miles. It can fly up to 42,400 feet and can climb at a rate of 7,620 feet per minute. The takeoff run to 15 meters is 1,380 meters while the landing run is 770 meters. The Intruder could also be loaded with different ammunitions.