The Grumman F8F Bearcat was designed and manufactured by Grumman as a single-engine carrier-based fighter that began service in the latter part of the Second World War. The aircraft was in service with the United States Navy, the United States Marine Corps, as well as the other air forces around the world during the mid-twentieth century. The Bearcat was the last fighter aircraft powered by a piston engine built by Grumman. 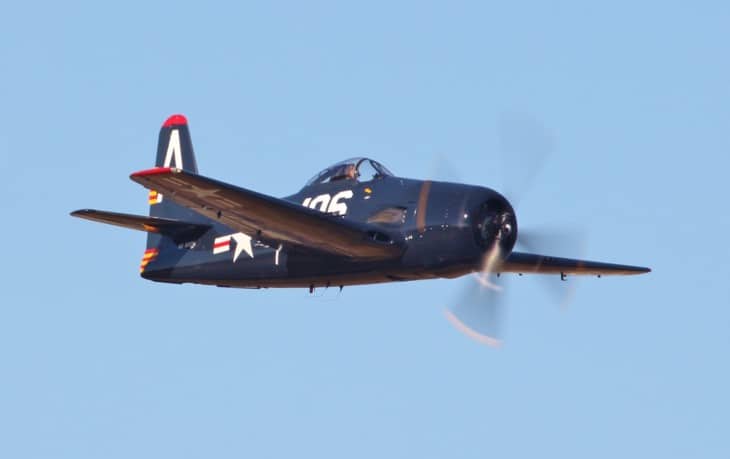 In November 1943, the F8F Bearcat design was finalized. On November 27, 1943, two prototypes were ordered; it was designated as the XF8F-1. After nine months, on August 21, 1944, the first Bearcat prototype took to the air for the first time. The aircraft performed a 4,800 feet per minute climb rate and showcased a top speed of 369 knots during the first flight testing. It entered service in 1945 and was retired in 1963 with the Vietnam Air Force.

The aircraft is fitted with a single Pratt and Whitney R-2800-30W Double Wasp engine. It is an eighteen-cylinder air-cooled twin-row radial engine with two poppet valves per cylinder, a variable-speed unified with the throttle through automatic engine control single-stage single-speed centrifugal-type supercharger, one Stromberg injection carburetor, and an air-cooling system. The engine is rated at 2,250 hp thrust and drives a four-bladed constant-speed propeller.

The F8F Bearcat has a maximum speed of 395 knots and a travel range of 960 nautical miles. It can fly up to 40,800 feet and can climb at a rate of 4,465 feet per minute. The takeoff distance is 185 meters and the landing distance is 250 meters. The aircraft could be loaded with four 20 mm AN/M3 autocannon, four 127 mm high-velocity aircraft rockets, and 454 kg of bombs.