The Grumman OV-1 Mohawk was designed and produced by Grumman as an armed military observation and attack aircraft built for battlefield surveillance to detect, locate, identify, and monitor the enemy, and as well as for light strike capabilities. It is a twin-turboprop aircraft with a tandem side-by-side configuration. Introduced in October 1959 by the United States Army, the aircraft was designed to fly from short and unpaved runways. 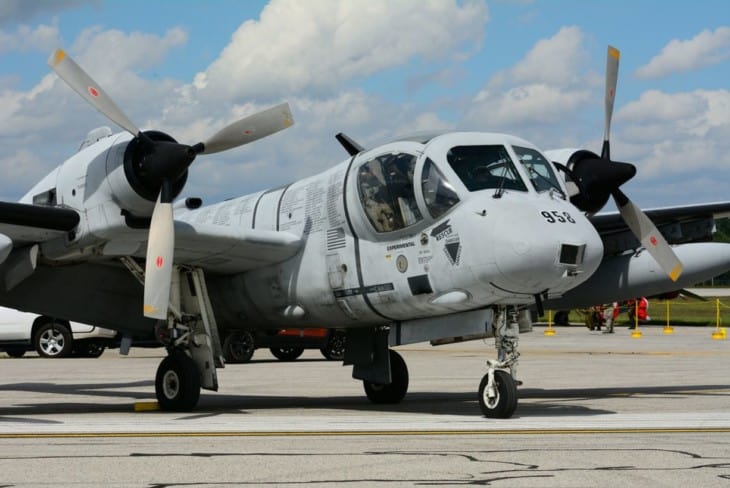 On April 14, 1959, the prototype designated as YAO-1AF performed its maiden flight. In October of the same year, the OV-1 daylight observation version entered production. A total of sixty-four OV-1As were built. The OV-1B was the SLAR version with a total of 101 aircraft built.

The Ov-1 Mohawk carries two crew members in a side-by-side seating configuration. It has an external length of 12.50 meters, an external height of 2.1 meters, and a fuselage diameter of 1.7 meters. The tail height is 3.86 meters and the wheelbase is 3.7 meters. It has a wingspan of 14.63 meters and a wing area of 33 square meters. The aircraft has an empty weight of 5,468 kg, a gross weight of 7,051 kg for IR missions, and a maximum takeoff weight of 8,214 kg for side-looking airborne radar missions. It has an internal fuel capacity of 276 US gal and a maximum payload of 1,050 kg.

The Mohawk is powered by twin Lycoming T53-L-701 engines. It is a turboprop engine with a five-stage axial and single-stage centrifugal compressor, reverse-flow combustors, and a two-stage HP and two-stage power turbine. The engine produces a maximum takeoff thrust of 1,400 shaft horsepower each and drives a three-bladed Hamilton Standard Type 53C51-27 constant-speed propeller with a diameter of 3.05 meters.

The aircraft has a maximum speed of 265 knots on the IR mission and an economic cruise speed of 180 knots. It has a stall speed of 73 knots and a never exceed speed of 390 knots. The travel range with external tanks on side-looking airborne radar mission is 820 nautical miles and the endurance is four hours and thirty-five minutes. It can fly up to 25,000 feet and can climb at a rate of 3,466 feet per minute on the SLAR mission. The takeoff distance is 358 meters and the landing distance is 320 meters.