The Grumman F9F-6 Cougar was the initial production model of the F9F Cougar carrier-based aircraft developed and produced by Grumman. It performed its maiden flight in September 1951 and was delivered from 1952 until 1954. 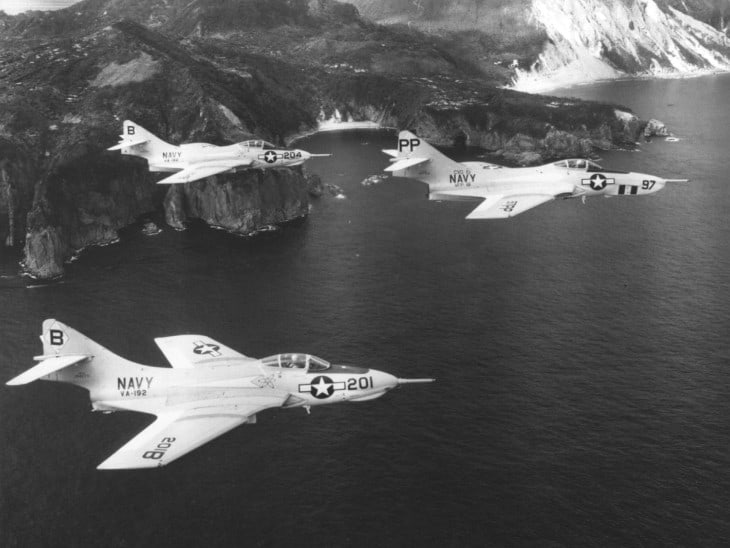 The F9F-6 Cougar was the first production version of the Grumman F9F carrier-based aircraft. Aircraft deliveries commenced from mid-1952 until July 1954. On September 20, 1951, the F9F-6 took to the air for the first time, seven months following the signing of the contract of Grumman with the United States Navy to build a swept-wing fighter aircraft.

It has an exterior length of 12.47 meters, an exterior height of 1.9 meters, and a fuselage width of 1.5 meters. The wingspan is 10.52 meters, the wheelbase is 3.5 meters, and the tail height is 3.75 meters. In 1962, the aircraft was designated as the F-9F. Sixty aircraft were manufactured as the F9F-6P reconnaissance aircraft fitted with cameras in lieu of the nose cannon. Several F9F-6s were designated as F9F-6D after it withdrew from service. These aircraft were used in combat training as unmanned drones. The F9F-6Ks were drone controllers.

The first thirty F9F-6 Cougars were fitted with the J42 P-6 engine but was then re-engined with a better J42 P-8, which was a license-built variant of the British Rolls-Royce Nene. It produces a maximum takeoff thrust of 7,250 lbf. The aircraft has a maximum speed of 568 knots and a travel range of 915 nautical miles. It can fly up to 44,500 feet and can climb at a rate of 6,750 feet per minute. The takeoff and landing distances are 640 meters and 415 meters, respectively. It has a maximum takeoff weight of 9,525 kg and a maximum landing weight of 7,167 kg. The maximum payload is 1,400 kg and the fuel tank capacity is 919 US gal.